6:02 PM Exclusive: Armed terrorist caught as he tried to infiltrate into Otniel in Southern Hebron.

2:57PM Event up North were Arabs cutting the border fence with Syria and trying to infiltrate into Israel. Arab media claims that Hezbollah terrorist managed to get in and out. IDF soldiers managed to defend the border and killed 4 infiltrators. Some Israelis were injured too. 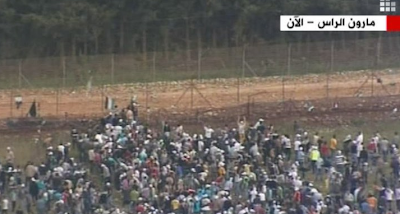 11:30 AM Israeli news reporting witness statements that after driver hit the last bus and his truck was stuck he got out and started attacking people physically including a girl he hit on the head.

11:10 AM Haaretz reporting that 2 terror trucks were involved.

11:02 AM UPDATE: AM Arab Driver is resident of either Kfar Kassem or Arara. 31 people injured. 1 Dead. 1 Critical. At least 2 people arrested, possibly 3.

Police stopped and captured terrorist as he was intentionally running people over.

This is what Jewish restraint and sensitivity to the Arabs brings.

People have to learn the same lesson over and over again... even the leftist morons in Tel Aviv!

Regarding Majdal Shams, Haaretz is reporting that those who were shot had illegally crossed the border from Syria, and that the ones doing the shooting were Tzahal (entirely justifiably, of course, but this isn't going to look good...)

I think the greatest fear is from the spineless peace prize w(h)inner in DC. He took weeks to decide to do the wrong thing (and the wrong side to support) in Libya; has done nothing for Iran and Syria; but I'm sure he will decide to do something to Israel any second now...