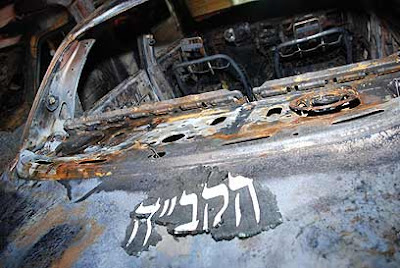 Sunday in Sederot...rockts, Monday, rockets. Tuesday...Wednesday...even on Shabbat the poor Sederotians don't get a break.

This past Shabbat morning in Sederot...the rockets continued to fall and landed on 3 cars. The only thing that remained from the above car were the initials for G-d; HaKadosh Baruch Hu (The Holy One Blessed be He).

Friday night wasn't quiet in Kiryat Gat either. In the Chareidi neighborhood of Kiryat Gat, a family caught a robber red-handed. After beating him up significantly that he couldn't run away anymore, he was dragged to a public telephone and forced to call the police to turn himself in.

The family didn't want to call themselves because it was Shabbat, so they forced the thief to call and turn himself in.

From a Jewish Legal standpoint of halacha, I have no clue if they asked in advance if that was the correct thing to do.

Seems to me that even a Jewish thief shouldn't be forced to call the police on Shabbat.

Sunday in Sederot...rockts, Monday, rockets. Tuesday...Wednesday...even on Shabbat the poor Sederotians don't get a break.

Here's an idea -- send the haredim from Ramat Beit Shemesh B to live in Beit Hanun. As soon as the Hamas guys start launching Kassams on Shabbos, they'll get lynched by the haredim.

Might not help for the rest of the week, but that should stop the Kassams on Shabbos...

The family didn't want to call themselves because it was Shabbat, so they forced the thief to call and turn himself in.

When the police car arrived, did they stone it?

There was a rash of burglaries in my old neighborhood. Some people weren't sure about calling the police (on Shabbos), so one of the Rabbi's in town got up and told people that they have to call the police.

However, this wasn't in Israel, so the burgler was not Jewish, and there was a concern, that he would just go to another house, and possibly endager the victims.

Lazer B: I can totally understand the logic of calling the police on shabbat...but in this case, they subsued the burglar and it seemed pretty obvious that he wasnt dangerous.

But to force the burglar to call the police? I guess that's the meaning of "schar aveira, aveira"

I would love to hear an opinion on the halachic implications of calling the police. From my Conservative perspective, I think that it was an emergency situation, and they were free to call themselves. (Or send someone over to the police station if one were close enough?) If they were that worried, what about the probability that the phone would be picked up by a Jew, and then a cop car driven over by Jews?

And I'm not sure that attempted robbery can be punished by making someone violate Shabbos.

I suppose they could have treated him as an unexpected Shabbos guest and kept him until they were able to call themselves. (Images of duct-taped captive being overfed elaborate meals and being called on by family members to support them in argument that erupts while learning...

Seems pretty clear, that from the burglar's point of view it was pikuach nefesh.