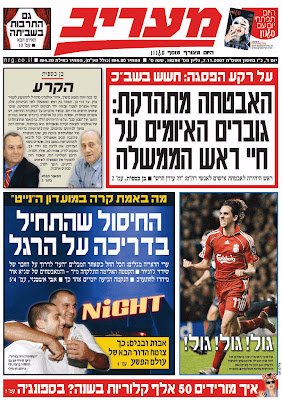 Due to the upcoming [Annapolis] Summit, The Shabak [Israel's secret police] is worried:

TIGHTENING SECURITY: INCREASED THREATS AGAINST THE PRIME MINISTER'S LIFE.
This is classic Israeli spin. PM Olmert's popularity is rather low, the Annapolis summit looks like a dud, the Palestinians are refusing to even acknowledge the right to exist of a Jewish State, so what's a Prime Minister to do?

Coming on the heels of Rabin's 12 year memorial, these "threats" against Olmert are allegedly coming from the "right wing." The media has banged into everyone's head that "words kill", and take every effort to remind us that any criticism towards Rabin is deadly -- after all, that's why he was killed -- because of vocal criticism. (Go on over and read David Von Treppenwitz's excellent incitement on this subject as well.) 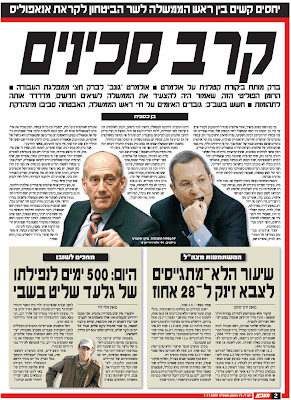 Unfortunately, Maariv is too busy condemning the right wing than to edit their own paper. On page 2 of Maariv is the following headline as well: Knife Fight !!! (thanks YB)

No, the knife fight isn't between the right wing and Ehud Olmert.

Rather this potentially bloody battle is between Olmert and Defense Minister Barak.

Perhaps someone should tell the Shabak where to look if they want to protect Olmert.

Who cares? Yossi Benayoun got us a hattrick!

PS "Knife Fight" would be a less clumsy translation.

"knife fight"?! am i missing something in the Israeli connotation of that phrase?