The ultimate ubiquitous bar mitzva gift in Israel is the Tefidanit, the waterproof, shock proof, tefillin case for the typical rambunctious teenager. 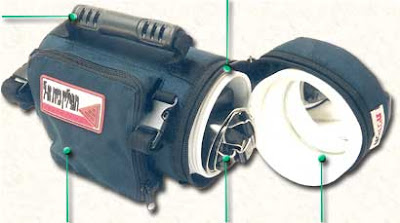 So when my sons got them as presents, I immediately made them write their name, address and phone numbers on a card and place it in the clear-plastic window of the Tefidanit in case they would G-d forbid lose their tefillin.

I had an extremely busy week, and it seemed that every night something else was going on -- school meetings, security, grocery shopping, MDA. I've been trying to get home early at least one night a week, and Thursdays seem like my only option -- I was in a meeting with my manager late this afternoon when my cellphone rang.

It was my son.

I told my manager to hang on a second, answered the phone, and asked my son if it was urgent.

His tears came through the phone, "Yes, Abba, it's urgent"

Apologizing to my manager, I walked back to my office and asked what was wrong.

"I left my tefillin at the bus stop. We finished school early because of the strike, took an early bus home, and I forgot my tefillin there."

"Do you remember where exactly?",I asked.

"Yes, and someone already found them. He called me a few minutes ago to tell me he had them. Could you please pick them up in Kfar Sava? I'm really really sorry..." he remorsefully trailed off.

So I drove to Kfar Sava to meet the tzaddik who had found my son's tefillin and called my son.

I drove to his apartment building, called him up, and he said he'd be right down.

The lobby's light turned on a minute later, my son's tefillin in hand -- the tzaddik opened the door looking for me.

Two things struck me immediately about this stranger-tzaddik; his bashful smile and the large silver nose-ring coming out of his left nostril.

I thanked him profusely, as he explained how he recognized it right away as a tefillin case -- and knew that someone would be very upset about missing it. He said my son was shocked when he called, not even knowing he had forgotten his tefillin at the bus stop, and a complete stranger was calling him up that he shouldn't worry.

This bare-headed, nose-ringed tzaddik who called and enthusiastically returned my son's tefillin, who fully observed the mitzva of returning lost objects, hashavat aveida -- li'mehadrin, helped restore a bit more of my faith in klal yisrael, even when sometimes the most tzanua act like menuvalim.

so, how would this incident play out with rabbi safran's thesis?

Wow. Was this the oldest son, or one of the younger ones?

"...for the typical rambunctious teenager" - wait a second, don't you use a Tefidanit for your tefillin, too?

Shabbat Shalom to the entire family.

A Shabbat Shalom to all. :)

My husband recently left his tefillin on a bench in Har Nof, Jerusalem after a bris. He returned home to Modiin, and after parking reached for them, and they weren't there. He could not return to J-m immediately due to a previous obligation, but drove back about two hours later. The tefilin were not on the bench, but a note in both Hebrew and English was there with a cell phone number. He called it and retrieved the tefillin from yet another tzaddik in Israel, very differently dressed from the one you describe. Two very different Jews, both caring about their fellow-jew and performing the same great mitzvah that made our day!

My son didn't have his tefillin a month when he left his backpack at a baseball game in Gan Sacher. That was our "sabbatical" year in Yerush.

Within a few hours we heard from our tzaddik. D. had his tefillin back by dinnertime. The man wouldn't take money, either, if I recall.

I once taught a student in Yavne (the city not the kibbutz) who had an earring and no kipa and came from a difficult family background and used to come to class on roller blades. I was teaching the present simple and we were telling each other that 'every day I do something at a certain time'. So I asked him to tell us what he did every day at 6 a.m. He said that every day at 6 a.m. he puts on tefillin.

So you never know, there are people here in Israel who do not look like it on the outside but who do hold on to certain rituals. I have seen this also with people who kiss mezuzot, not to mention women who come to mikveh in the most unlikely dress.

Great story! Did you ask him if we wanted to "lay" Tefillin? :)