Its now the evening of Hoshana Rabba, and here's a roundup of all the interesting news from sukkot...

- 8:15 PM this evening, Palestinians hurled multiple firebombs were thrown at cars on the highway 55 between Kfar Saba and Karnei Shomron. No injuries reported, but the police and IDF did close the highway for an hour, resulting in a car accident with lightly wounded motorists.

- I was supposed to go to Kever Yosef last night. Last night was the "Ushpizin" of Yosef, and over 1000 people were allowed in. A new tomb marker has been installed and the dome has been fixed -- both of these were destroyed by an Arab mob 10 years ago, and it took 10 years for them to be fixed.

- Delusional Israelis take part in yet another pro terrorist flotilla, which was intercepted by Israel's Navy today.

During their interrogation, the Israelis said they wanted to transfer humanitarian aid to Gaza as well as bring a message of peace. Yonatan Shapira, a former Israel Air Force pilot who took part in the sail, said soldiers resorted to violence while taking over the boat.

"There are no words to describe what we went through," he said. "The IDF Spokesperson's Unit is trying to paint a picture as though the takeover was not violent, but the soldiers' actions were violent and disgusting. I was tasered by a soldier. Our message is that the occupation in Gaza cannot continue."[ynetnews]

Oh no! He was "tasered"? How about all the lethal rockets being shot at Israel daily by Gaza?

Too bad these Israelis care more about Gaza and its terrorist government, than say, kidnapped IDF soldier, Gilad Shalit.

- It has now been revealed, in an investigative piece by the Washington Times, that J Street was brazenly lying every single time they repeatedly claimed that they have received no funding from George Soros.

It also turns out that the lion’s share of J Street’s funding has come not from small grassroots donations by American Jews as J Street claims, but from a mysterious, unknown wealthy woman from Hong Kong, who provided more than half of their funding in 2008/9.

Some more information on George Soros that I hadn’t known about before: During the Holocaust, he was a member of the Judenrat, who collaborated with the Nazis by assisting them in confiscating Jewish property. He does not deny having done this, and to this day, says that he feels no guilt whatsoever over it, since – in his words – “if I wasn’t doing it, somebody else would be taking it away anyhow” (PajamasMedia) [h/t: Lurker]

- Caroline Glick's eye opening analysis of what Israel's Left is really after.

Following the example of its counterparts in the West, for decades the Israeli Left has carefully cultivated its image as the fun side of the political divide.

In a thousand different ways, the public was told that the Left is on the side of tomorrow. It is the home of optimism. If you want a cheery future, if you want to party all night long and never get a hangover, the image-makers told us the Left is the place to be.

From the Left's perspective, the peace process between Israel and the PLO was the fulfillment of its promise. It was also its key to a permanent cultural monopoly and control of government.

- The Jerusalem Post had a disturbing round of Op-Ed pieces starting with one from Israel's worst PM ever, Ehud Olmert, who brags about his idea for relinquishing Jewish soverignty over Har HaBayit.

- Right before Sukkot started, Israeli Arabs rioted in the City of David/Silwan neighborhood. Here are some photos of their peaceful demonstrations (from Palestinian websites, PANet and Palestine 48 and rotter.net) 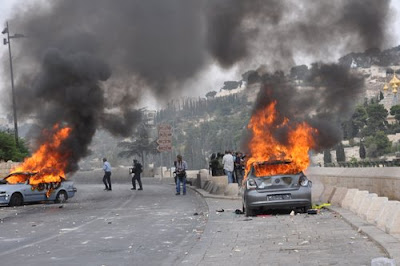 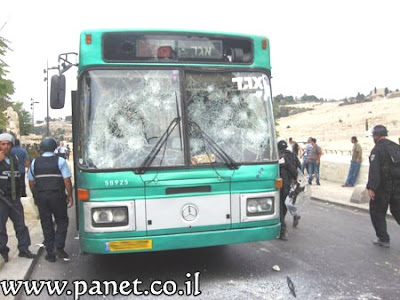 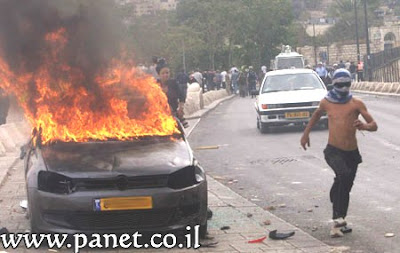 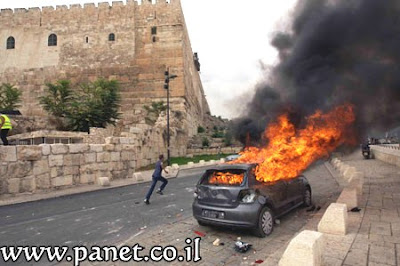 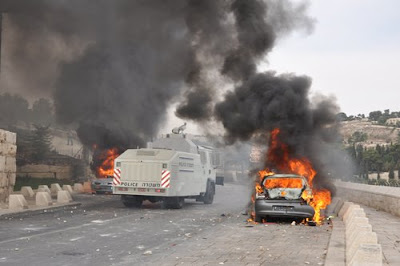 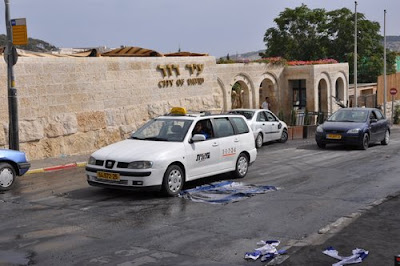 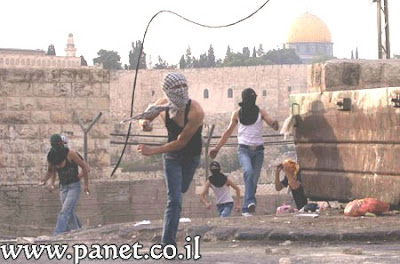 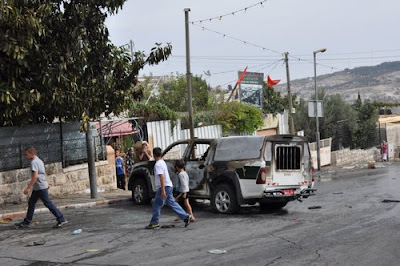 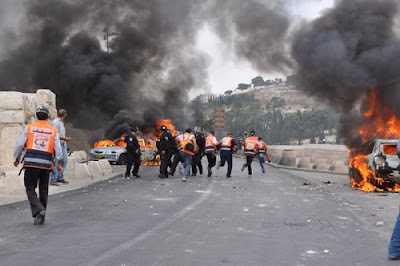 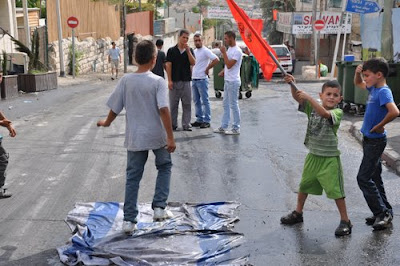 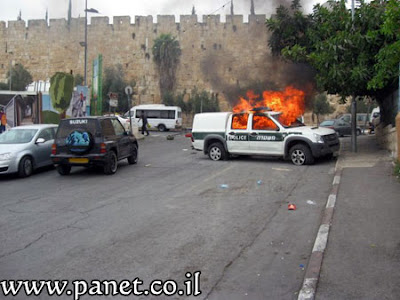 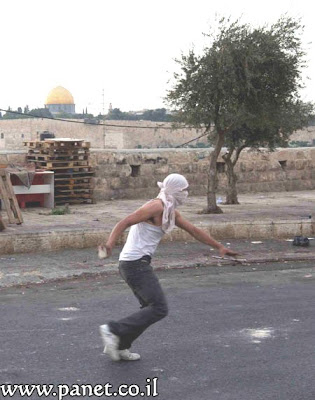 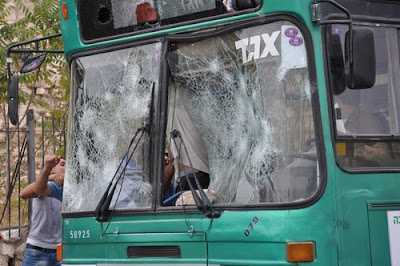 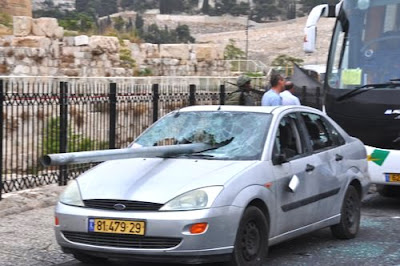 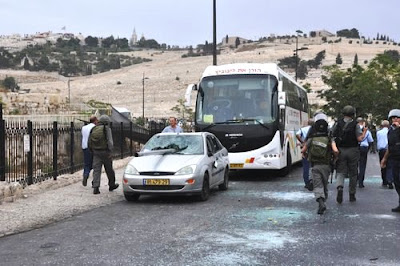 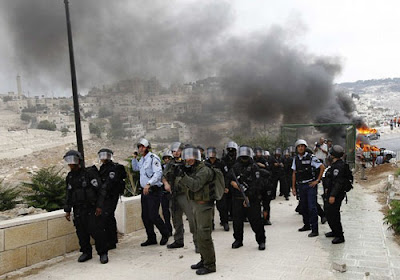 I doubt you saw these pictures in your local newspapers.

That's all for now. Have a Happy Sukkot...and my apologies to the Chabad readers who buy their etrogim from Eretz Yisrael.

What a heartwarming sight! Peace-loving Arabs, peacefully firebombing their neighborhood. You can almost smell the burning gasoline. Ahhh.

At least they aren't doing anything really threatening or dangerous, like praying!

The way the Islamics always hide their faces reminds me of the way the KKK hid their faces here in America. They are just cowards. You cannot let them stay in Eretz Yisroel. They will destroy it and you, and your future. Remember that Sarah DROVE OUT Ishmael and Hagar. Remember Devarim says not to let idolators and those who worship others gods live in Israel. It says drive them out or Hashem will destroy us.
We need to drive them out. And we need to do it at the culmination of this next big war. And we need to push our borders back and add BIG BUFFERS ZONES. Okay, we'll see. But I bet we kick their collective butts like we always do. Then let them go wreck someone elses' country. I have grandkids I want to see grow up safe educated and relatively hate-free.

its really hard to scroll through the blog with the pictures taking up so much space!

In re Soros: he was only 13-14 at the time and I read an interview where he said it was because he was compelled to join the Judenrat and saw what Jews were doing to each other that he became disinclined toward Judaism.

Forget politics for a moment. Your Soros Judenrat reference? Despicable.
Try not to criticize people who had to live through the Shoah,no matter how they did it, OK?

Why not read through the enclosed link where the Soros story came from as its rather eye opening.

As for sechel, this is a blog that bounces ideas around. Comments are welcome. Why should I feel shame for bringing up the Soros Judenrat reference? He certainly has no problem with it.

Anonymous @ 9:26 PM: Forget politics for a moment. Your Soros Judenrat reference? Despicable.
Try not to criticize people who had to live through the Shoah, no matter how they did it, OK?

"No matter how they did it"? Really?

What about someone who actively participated in murdering Jews? According to your dictum, he shouldn't be criticized, either. That's a pretty repulsive moral perspective, to put it mildly.

Furthermore, it doesn't appear that you even bothered to read the source that was provided: The most disturbing part is not simply that Soros collaborated with the Nazis -- sending fellow Jews to their deaths and stealing their property -- but the fact that to this day, he sees nothing whatsoever wrong with that, and feels absolutely no guilt over it. Quoting Roger Simon:

"Well, okay, you're thinking -- he was fourteen. Give the guy a break. And I must admit that I -- a secular Jew like Soros -- have occasionally speculated about how I would have behaved in similar circumstances. And, although in my fantasy I might be a noble resistance fighter, laying my life on the line against fascism the way Primo Levi and others have described it, I certainly have no way of knowing. I might have been a sleazy collaborator myself. But I do know this: if I had done something like that just to survive, it would have haunted me the rest of my days.

"And here’s the really creepy part: not so George Soros. In a surprisingly overlooked interview with 60 Minutes' Steve Kroft, Soros denied guilt or second thoughts about his World War II activities.

'How does Soros feel about what he did as a teenager? Has it kept him up at night?

'Steve Kroft of 60 Minutes asked him that. Was it difficult? "Not at all", Soros answered.

'"No feeling of guilt?" asked Kroft. "No", said Soros. "There was no sense that I shouldn't be there. If I wasn’t doing it, somebody else would be taking it away anyhow. Whether I was there or not. So I had no sense of guilt."'

"Somebody else would have done it. Sound familiar? It's just the kind of excuse you might use when devaluing the British pound. A psychoanalyst might call it "splitting", taking a part of your personality and splitting it off, as if there were two disconnected parts of you -- the monster and the good citizen. The good citizen provides a mask, a disguise for the monster to do his work."

If you see nothing the matter with Soros' attitude regarding the morality of his collaboration with the Nazis, then your own morality is as pathologically twisted as his own.

Anonymous: Use some sechel.

I would give you the very same advice. You seem to be in serious need of a moral compass.

I guess the Arab attendant of the Givati parking lot protected the cars inside?

Do me a favor: When you have a gun to your head, someone is starving you, you're wearing a Gold Star and you can smell the crematorium, call me.
Until then, judge him for his present activities, but really, just leave his Holocaust activities out of your animus toward the man. You probably don't understand this, but it just makes you look, well, foolish.
Nuff said.