Every year there is a religious battle in Israel. There shouldn’t be one anymore once the compromise was reached (and it was), but some people just can’t let go, just to score cheap points with their electorate in this populist war.

(And it is a religious battle, no matter what other claims and arguments are being sprung forward.)

I won’t deny that I like that Yom Kippur ends around 6 instead of after 7. While the fast may be the same 25 hours, we all count the hours when it ends from the time we wake up. 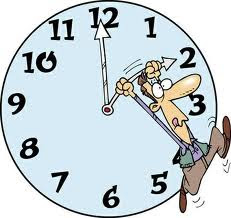 But changing the clock wreaks havoc. It’s easy enough for me to look at my watch and say “another hour, go back to sleep”, but go tell that to your kids who know what time it really is – and wake up (and stay up) accordingly.

And isn't that the worst?

And wouldn't it be nicer if the Chol Hamoed Sukkot day ended later so the day trips needn’t end in the dark.

Yet it’s nice that Shabbat and holidays starts earlier, while the kids are still awake.

And that brings us to Pesach.

Wouldn’t you rather the Seder started earlier, so the kids could stay awake “later” and enjoy it to the end?

But then, there are the Pesach day trips that would be affected negatively.

In short, changing the clock just messes everything up.

How about we compromise for one year and don't change the clocks at all.

That would be a twist in time.

I've always thought that changing the clocks was simply stupid.

If a business needs to open during daylight only, they should have 'winter' hours -- otherwise, this changing of the clocks just messes everything up.

There's no reason to have daylight time at all. Studies have shown it saves no money, saves no lives, etc. Just another way for the government to intrude itself into our lives.

Too bad the secular fundamentalists in Israel who are "pro-daylight savings time" didn't read the article in Scientific American, which researched and discovered that it WASTES energy.

Besides -- this isn't a "religious" battle -- the current law was created by Meretz and Shinui.

Besides -- this isn't a "religious" battle -- the current law was created by Meretz and Shinui.

Yoni: So Meretz and Shinui's constituents are pro-energy waste?

Too bad the secular fundamentalists in Israel who are "pro-daylight savings time" didn't read the article in Scientific American, which researched and discovered that it WASTES energy.

Or maybe they understood that the article is inconclusive, citing some research that says it wastes energy, and others (6th paragraph) which says it saves energy. Or maybe they read the article to the end and found that the switch to DST lowers the number of car crashes, including those involving pedestrians.

So Meretz and Shinui's constituents are pro-energy waste?

You'd have to ask them. It's possible that they live in a complex world where considerations besides energy usage are taken into account. I find myself in that world pretty often as well. (My move to Israel involved my consumption of more energy than had I stayed in the States. Should I go back?)

There's a "clock" on this page, with "Eretz Yisrael time".

The clock is still on summer time
:)

There are also competing studies that indicate no reduced (and some show even increased) traffic accidents because of DST.

In short, nothing conclusive can be said about it.

The clock has been changed.

The clock never changed rather the time changed.

daylight savings time was originally created for the farmers

here in the states, they have expanded dst and contracted standard time in an attempt to cause less havoc.

not sure why it matters if yom kippur ends an hour earlier....just makes it impossible to have a break (my shul always ends up with a good 2 hour break...trust me, i need the rest)

" smb said...
This year in LA we don't change it until the end of octobe"

That was also done for religious reasons. Don't want kids doing trick or treating in the dark!

Actually, in the US, it doesn't change until November.

The "farmers" thing is a myth. Farmers hate daylight time, because cows don't follow it. So they're ready to be milked no matter if the truck was there an hour earlier or won't be there for another hour.

I think that changing the clock especially for Yom Kippur is very silly. In my shul, we start at 7:00 on Yom Kippur morning. If we were still on DST, we would probably be starting at 8:00. So the break would be exactly the same length.

What is even sillier, though, was that there was talk of modifying the rule this year, with only a week's advance notice, after software throughout Israel was already programmed to expect the switch on a certain day. That would have caused a huge mess. Did nobody look at the calendar when they first passed the law, and see that Rosh haShanah sometimes falls at the beginning of September? Why was this a surprise?

While I would love to see much more everyday use of the Hebrew calendar in general, this is one thing that really ought to be based on the date in the solar year. That being said, I think that September is not such a bad time to change the clocks. Do we really want to wait until the beginning of November, when sunrise would get as late as 7:00? The whole point DST is to take sunlight that's being "wasted" while everybody's asleep anyway and transfer it to the evening, where it will get better use. But I think there are plenty of people who appreciate the sunlight at 6:45 in the morning.

I don't think that either UTC+2 or UTC+3 is inherently "better" from a religous perspective. They each have their pros and cons. I suspect that there are people who would find it hard to say keria't shema and daven on time in the morning in the summer if it weren't for DST. If we were in sha'on choref at the beginning of June, sof zeman keri'at shema (GRA) would get as early as 8:05.