On 25th June 2006 Gilad Shalid was kidnapped by Palestinian armed forces and taken in to captivity in Hamas controlled Gaza.

For over 4 years repeated efforts by the International Committee of the Red Cross to visit, or even make contact with, Gilad Shalit have been rebuffed. 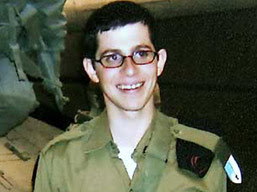 The International Committee of the Red Cross (ICRC), of which Magen David Adom is a part, acts in various ways to protect the victims of armed conflicts and, as a consequence, to work for the defense of human rights. It has been entrusted by the Geneva Conventions themselves with the task of contributing to and watching over their application; this is does mainly by its visits to prisoners of war and civilian internees.

By signing this petition you will be contributing to a worldwide movement to ensure that pressure is placed on Hamas to provide this access and to keep the issue of Gilad Shalit in the focus of all those who can influence events in that region.

Nachum: MDA's part of the ICRC. See here on Wikipedia.

No, read the link you provided. Eh, it's no big deal.