The virus, named "stuxnet" is also causing all sorts of damage to China as well.

A computer virus dubbed the world's "first cyber superweapon" by experts and which may have been designed to attack Iran's nuclear facilities has found a new target -- China.

The Stuxnet computer worm has wreaked havoc in China, infecting millions of computers around the country, state media reported this week.

Stuxnet is feared by experts around the globe as it can break into computers that control machinery at the heart of industry, allowing an attacker to assume control of critical systems like pumps, motors, alarms and valves.

Suspicious fingers are pointing towards a silent Israel, and that the super top secret 8200 unit was behind it. 8200 is so top secret, that writing any more about it than the above mention could get this blog deleted and turned into a Belgian Website selling waffles.

On Thursday the NY Times found an alleged smoking gun, that Israel might be behind the virus -- in that one of the modules in the malicious software is named "Myrtus" (Hadas).

That use of the word “Myrtus” — which can be read as an allusion to Esther — to name a file inside the code is one of several murky clues that have emerged as computer experts try to trace the origin and purpose of the rogue Stuxnet program, which seeks out a specific kind of command module for industrial equipment.

Not surprisingly, the Israelis are not saying whether Stuxnet has any connection to the secretive cyberwar unit it has built inside Israel’s intelligence service. Nor is the Obama administration, which while talking about cyberdefenses has also rapidly ramped up a broad covert program, inherited from the Bush administration, to undermine Iran’s nuclear program. In interviews in several countries, experts in both cyberwar and nuclear enrichment technology say the Stuxnet mystery may never be solved.

There are many competing explanations for myrtus, which could simply signify myrtle, a plant important to many cultures in the region. But some security experts see the reference as a signature allusion to Esther, a clear warning in a mounting technological and psychological battle as Israel and its allies try to breach Tehran’s most heavily guarded project. Others doubt the Israelis were involved and say the word could have been inserted as deliberate misinformation, to implicate Israel. (NYTimes)

Instead of focusing on the Purim-time message of Esther/Hadas/Myrtle, the NY Times could have chosen the much more timely message of the current Jewish festival of sukkot -- in which the myrtle branches, "Hadassim" are ceremoniously waved along with the etrog, lulav and aravot (as part of the 4 species) 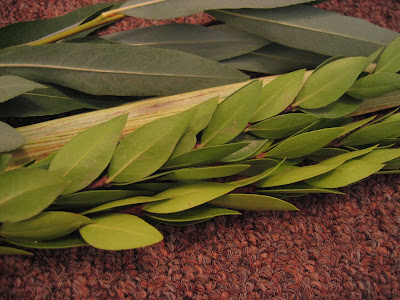 Regardless, I'm glad my blog isn't hosted on a Siemens Control Host computer...and I proudly serve in the IDF reserves (I hope that will keep my blog safe for now).

Jameel, while sukkot is more timely, I think that "Esther - Hadassah" is a great codename for a plan to take down a genocidal Persian plot from the inside.

I don't think anyone's going to be upset at you for releasing that "top secret" info ;)

I like the idea that myrtus was used because the virus came from eco-terrorists :)

If the virus is really so powerful and dangerous and "scary," why hasn't the iranian nuclear reactor exploded yet?

I think this is a big bluff, and it is being propagated by governments with the uninformed media as useful idiots - the govt agents and spies simply lie to them and feed them misinformation. This will probably be the next "terrorist threat" and some phony, meaningless hyped craze like Y2K in order to promote foreign policy agendas and new legislation.

I've been thinking this was Isreal since I first heard about it. I know enough Israeli software developers to know how they think, and Stuxnet has got Isreali-software-developer-think written all over it! ;)

Israeli cyber weapon is not taking over the world because there are more countries have in world whose technology are superb. free antivirus download