Why is Obama Supporting Apartheid? 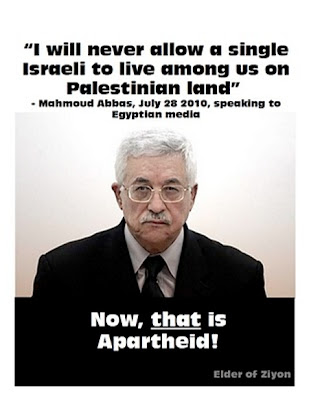 Here is an interview how Abbas would explain his position.

The way the poster is set up, it's not really apartheid. The word "Israeli" is significant. It suggests that anyone holding Israeli citizenship, including Arabs, would be denied the right to live in Arafatistan. However, it also suggests that anyone who reliquinshes his Israeli citizenship would be allowed. Hence Neurei Karta thugs could probably apply for immigrant status in the new state. This is how Obama can support such a position.
(That Abbas will later define Israeli as including any Jew from anywhere except the Neturei Karta will never be picked up by Western media)

It is illegal under international law to not allow a person to live in your country because they currently have citizenship in another particular country. (Or because they aren't yet a citizen.)

France recently got in trouble with this because they attempted to deport all the Roma.

So as much as "apartheid" means segregation and unlawful laws maintained by the country.. it would be apartheid.

>It is illegal under international law to not allow a person to live in your country because they currently have citizenship in another particular country. (Or because they aren't yet a citizen.)

What is your source for this? I know that not all countries accept dual citizenship, and therefore, I imagine, in those countries, holding onto one citizenship and refusing to acquire that of the nation-state you are residing in means you are not a citizen. I'm assuming that not being a citizen means you are subject to the same immigration and deportation laws as anyone else.

More broadly, I think we should consider what Abbas is saying, and whether this qualifies as apartheid.

Apartheid, as I understand it, is a policy by which a state segregates its population into different classes of citizenship, classically based on categories of race. Being a member of one race allows you certain privileges that being a member of another race does not. Apartheid is a word that describes domestic policy towards a state's own citizens and residences. It is therefore nonsensical to describe a state's attitudes towards another state's citizens as apartheid.

Abbas, at least as I see it, is saying that he will not sign onto a peace agreement that does not involve the transfer of all Israeli citizens currently living in the future Palestinian state (i.e. settlers) out of that area. I'm not sure why this qualifies as apartheid, at least, in the standard definition. Strictly speaking, he is not even talking of expelling the settler population, but rather of requiring that the Israelis recall their own citizens. I'm unclear as to what the official stance would be on settlers that agreed to renounce Israeli citizenship and accept Palestinian citizenship, but my assumption is that such an option will probably not even be available.

After World War II, many Central and Eastern European countries expelled their German populations, some of which had been there for hundreds of years. After the Greco-Turkish War, Greece and Turkey agreed to exchange about 2 million citizens. I don't think we should conclude that the Greek, Turkish, Allied, and Jewish governments are apartheid governments.

"holding onto one citizenship and refusing to acquire that of the nation-state you are residing in means you are not a citizen. I'm assuming that not being a citizen means you are subject to the same immigration and deportation laws as anyone else."

You don't have to be a citizen to live somewhere. But Abbas isn't talking about citizenship, he is talking about living in a location.

It is an international human right to be allowed to travel and live anywhere in the world you wish to do so.

"I. The Right to Travel— International Standards

The underlying principle that people should have the widest possible freedom to move between their own countries and other nations is based on several universally recognized human rights standards. A number of major international human rights treaties guarantee the right of people to leave any country, including their own, and to return to their native countries. While nations have general authority to control whether foreigners can enter their territory, they are prohibited, under non-discrimination standards, from arbitrarily excluding people of particular nationalities, races, or political viewpoints from entering their territory. The right of free movement also is closely connected to the exercise of free expression and free association rights.7"


" Some immigrants' rights advocates assert that human beings have a fundamental human right to mobility not only within a state but between states."

Now it doesn't mean you get free mobility to anywhere under any circumstances. It just means that if your movement is to be restricted, it has to be for a justifiable cause.

One has to be a real moron to think that abbas is speaking in terms of citizenship status with comments like this. He is making himself very clear. He is talking about Jews.

A Jew is an Israeli is a zionist.

Since someone mentioned it, I can see naturei karta freaks being given special permission since they are bogdim and especially love to kiss the arab donkey. Any other Jew/zionist will be considered an israeli, no matter what his green card says, no matter what kind of visa he has, no matter what kind of citizenship he has. Abbas is saying that Jews cannot live in his state and that "settlers" who are already in what they consider their land will not be allowed to stay under any circumstance (even if they wanted to acquire for themselves "palestinian citizenship" - they are Israeli and therefore cannot. In the terms in which abbas speaks, paperwork does not change the fact that a person is an Israeli).

Sometimes the stupidity of some Jews in the blogosphere astounds me and embarrasses me as a fellow Jew. But then I speak with real, live Jews and I realize that the blogosphere is merely a sample from the population at large and will reflect the same nuttiness seen on average with Jews at large. God save us from the blind and delusional amongst our people!

>You don't have to be a citizen to live somewhere. But Abbas isn't talking about citizenship, he is talking about living in a location.

True, but if you're not a citizen, you have very little actual ground to stand on. You may be accorded permanent residence status or resident alien status or refugee status, but you also may not. And if some countries refuse to give citizenship to residents with foreign citizenship (which many countries seem to do), it stands to reason they don't have to accord them any sort of legal status at all, so far as I know. Thus, it seems perfectly legal under international law, at least as practiced, for a country to deny someone the right to live there based on prior citizenship and nationality.

Regarding your citation, I'm not sure a position paper written on behalf of the American Association for the Advancement of Science has the binding force of international law. I have no doubt the AAAS wishes there were no restrictions on the travel of American and Cuban scientists to each other's countries, but I don't think this is recognized by anyone else. Indeed, the fact that the AAAS is labelling the dominant practice as illegal strongly suggests the opposite.

And I don't think your position is settled international law, so much as such a thing can exist. The United States definitely has immigrant quotas and definitely excludes nationals from many countries, and retains the authority to do so in the future. My grandparents were legally excluded from entering this country by such quotas. The United Kingdom definitely confers additional benefits upon Commonwealth citizens than on citizens from non-Commonwealth countries. Israel definitely discriminates in who it lets enter and reside in the country, largely based on nationality and religion.

You may think this all illegal, but at least in the sense that international law is thought to operate, it's quite legal.

"You may think this all illegal, but at least in the sense that international law is thought to operate, it's quite legal."

I don't think those things are illegal. But they are quotas, not outright denying of entry.

Meaning, maybe only 5,000 mexicans can enter the US legally a year, and live in the US. But that 5,000 is much larger than the blanket 0 that abbas would allow.

Look at the recent scandal in France and the Roma as an example.

>Meaning, maybe only 5,000 mexicans can enter the US legally a year, and live in the US. But that 5,000 is much larger than the blanket 0 that abbas would allow.

Conceptually speaking, what's the difference? Implicit in the right to restrict activity is the right to prohibit activity. There have been times when countries have decided not to allow any immigrants all from certain countries. How many new Arab Muslim immigrants has Israel had in the last 40 years, for example?

Under your distinction, would it be legal for Abbas to agree to let one Jew/Israeli reside in Palestine? Would that make it a legal quote, and not an illegal absolute bar?

>Look at the recent scandal in France and the Roma as an example.

I think you're misinterpreting the issue there. The Roma in question are citizens of Romania and Bulgaria, which are EU member states, as is France. There is an explicit right for all EU citizens to freedom of movement between all EU member states. Meaning, a citizen of Bulgaria has every right to live in France. France relinquished many of its immigration control prerogatives when it acceded to the EU. The EU is a highly unusual state of affairs, however, and in a sense, the exclusion proves the rule. Normally, a country has supreme authority to decide whom to admit and whom to deny. France is perfectly within its rights to deny all Americans entry or residency (unless that violates the provisions of some other treaty).