NIF vs The Jewish State

The New Israel Fraud is at it again, and this time they are outraged at the oath of allegiance proposal that Israel is a Jewish and Democratic State.

They now say it outright -- their vision for a "New Israel" -- is one without any connection to Judaism whatsoever. The new disingenuous NIF slogan is "equality and democracy for all Israelis" -- and "all Israelis" can be from Ghana or Sudan...

Their most recent call is that Israel may not have any religious character whatsoever, and must be a "state of all its citizens."

See the NIF "call to arms" below, in their sample letter of protest of PM Netanyanu, where they express "deep concern" as "staunch supporters of a [non-Jewish] Israel" -- that declaring Israel to be a Jewish and Democratic State is "infuriating." 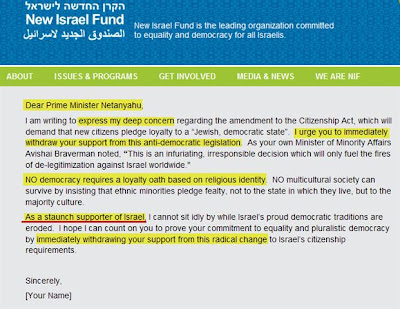 When NIF's director states that "Israel cannot be anything less than a State of all its citizens," he is blatantly calling for the removal of Israel as a Jewish State.

Come to think of it, there's no difference between him and PA President Mahmoud Abbas who refuses to recognize Israel as a Jewish State.

Its about time for NIF to stop with the subterfuge and rename itself as the New Palestine Fund. 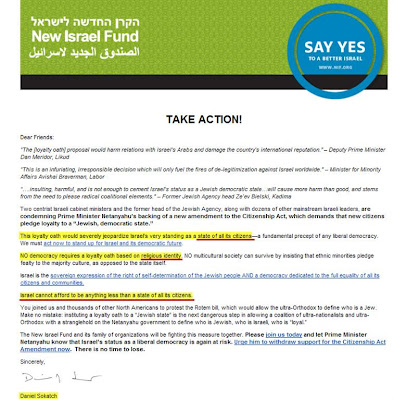 I can't stand the NIF and the ideas they support but this post is misleading at best. You wrote

"They now say it outright -- their vision for a "New Israel" -- is one without any connection to Judaism whatsoever.

The new disingenuous NIF slogan is "equality and democracy for all Israelis" -- and "all Israelis" can be from Ghana or Sudan...

Their most recent call is that Israel may not have any religious character whatsoever, and must be a "state of all its citizens.""

The form letter and bullet points do not say any of the above. They are not saying Israel cannot have an religious character just that not every citizen should have to swear to an allegiance to that character. These are two different questions. I believe Israel should not give another inch of the shtachim back to the Palestinians but I don't think every Israeli Arab should have to swear an allegiance to such an ideology.

Armenia is a state of all its citizens; but it is the homeland of the ethnic Armenian people. Non-Armenians granted citizenship there can be expected to help defend the Armenian state in exchange.

Israel is a state of all its citizens; but it is the homeland of the ethnic Jewish people. Persons becoming citizens can be asked to defend the Jewish homeland without being required to be of the Jewish religious faith (ask the Druze).

It's one thing to suggest that we should do away with all ethnic states, and live together as one amorphous humanity;

it's another to say that only the ethnic Jewish people shall not be allowed to have a distinct homeland of their own.

Fantastic blog for air travellers to get information regarding airlines,cheap airfares,online air tickets and much more if you want some more in this field then must visit london delhi flights schedule.

This isn't a new NIF campaign as you've dressed it up- this is a response to Liberman's disgraceful plan, one which you're clearly in favor of if you're going to use it to springboard yet another pathetic attack on the New Israel Fund. I'm sure even your foaming-at-the-mouth regulars are getting bored of them.

Thankfully the NIF is (and always will be) much stronger than you and your sinat chinam. You may well delude yourselves with notions of being a voice of sanity against the evil leftist Eruv Rav, and seriously believe that your defamatory posts will help bring an end to said "evil", but you are truly- delusional. Fume all you like, nobody who matters is listening to you.

That's really funny. NIF funds outright anti-Zionist organizations like Adalla, and you say defneding the Jewish character of the state is needless hatred?

Funny guy you are.

Rob: You must have missed the memo.

Thankfully, outside of this bitter far-rightist blog, and a few other increasingly irrelevant seething settler mouthpieces, the world knows the truth. And furthermore, if you continue to ostracize yourselves, when the time comes in the not-too-distant future for the Center to stand up for the right and safeguard your privileged, subsidized existence, it simply will not happen if you continue to present yourselves as a bunch of paranoid lunatics.

So you should write that in the post. What you wrote is misleading.