As the budget passes to include more funding for those who study in Yeshiva, the following article on ynet was interesting. Obviously he doesn't represent the entire Chareidi society, but his points about Chareidi politicians are right on the money (I've written about it before).

Yehoshua (not his real name - "if someone identifies me, I'm finished") arrived at our meeting with his hat leaning sideways on his face and his coat folded in a bag. He is tall, slim and wears glasses. Lights side curls hide behind his ears and his cheeks are adorned with a stylish beard. He's fluent and often uses Yiddish slang as he speaks. He spends eight hours a day at the kollel before returning home to his wife and children at the haredi community they live in.

"Don’t give the haredi politicians what they want; don't bring back the assured income," he pleads, and this is the essence of the rare interview you are about to read. But first, Yehoshua would like to stress that his intention is not to present the haredi society as lazy or deceptive. On the contrary, he says, I have a lot of constructive criticism. Politicians, he adds, are those preventing him from contributing to the society. "We are as uncomfortable with the mutual hatred among the people," he explains. "People, we are brothers."

"When the seculars established the State they made every young person go to the army. The haredim refused for two reasons: They didn't want to get killed because of the army and they refused to be subject to a secular society. So the agreement was that everyone would withdraw from society in order to maintain our religiousness and study Torah from morning to evening while the wife provides for the family," he begins his fascinating monologue.

"What happened was that the seculars have been funding the haredim ever since. We must remember that at the time the haredi public was very small and the secular public could still carry them on its back. In Europe there were always 'landlords' who would work and fund the minority who studied and were really prodigies. Today it's different – everyone must study and spend the whole day at the kollel.

The first instance of the "superbug" has been detected in Israel, Channel 10 reported on Tuesday.

The patient, who recently returned from India, was diagnosed as having the bug that is resistant to all known antibiotics, doctors said.

The woman, who reportedly brought the bug back to Israel with her, was placed in quarantine at Sheba Hostpital at Tel Hashomer when doctors confirmed that she had the "New Deli" bug, Channel 10 reported.

Israel ranks among the most corrupt countries in the Western world, according to a study released by the International Transparency Organization on Tuesday.
Out of 178 countries - 1 being least corrupt - Israel was listed at number 30. But when compared to other member states of the Organization for Economic Co-operation and Development, Israel fared much worse.

The least corrupt countries were listed as Denmark, New Zealand and Singapore.

Israel received a score of 6.1 out of 10 in the Corruption Perceptions Index (CPI), which ranks countries according to the perception of corruption in the public sector.

That score positions Israel in the 22nd place out of 33 members of the OECD.

(However, the USA slipped to an historic low...in global corruption as well)

And last but not least...

You can't make this stuff up!

None of this is remotely true, by the way, and has no basis whatsoever in medical fact. It is simply the latest load of crap that my subconscious mind decided to try to sell me in my sleep last night.

Apparently I was buying.

Read it all at Treppenwitz. 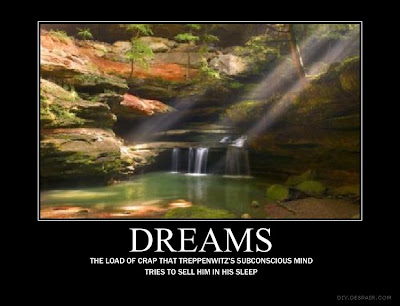 That's all for tonight.

Why are posting this anti-chareidi crap? I didn't realize you were so sympathetic to Kadima and their like. This article like most of them is designed to stoke baseless hatred. If they wanted to discuss the issue objectively, they could give some actual figures about the money spent on university students vs. kollel guys. The government pays about 700 shekels a month to the kollel guys. That's it. There's no other subsidy. There's nothing here except baseless hatred and lashon hara.

Actually, I don't think this post is anti-Chareidi. If you read my link, you'll see my problem isn't at ALL with the Charedi world, just their askanim and politicians.

There's nothing here except baseless hatred and lashon hara.

This viewpoint was written by a Chareid guy. He's not trying to be anti-Chareidi.

I suggest you reread what I wrote, and see this isn't Chareidi bashing, nor baseless hatred and lashon hara.

If anything, we need to figure out a way so that everyone appreciates each other.

I don't believe it was really written by a chareidi guy. I live in a chareidi community and have learned in kollel, and there are elements of what he says that are not accurate. There are elements of truth to it, but I suspect it is just more propaganda.
These kollel students are given a small fraction of what university students get already.
Chareidi elementary schools receive significantly less funding than secular or state-religious schools, for all the noise made about the lack of secular subjects.

Do you really begrudge kollel students this 700 nis a month, or believe that there are people learning 1 hour a day and getting that money on a widespread basis? The whole political aspect and the hate-mongering that is fashionable amongst Israeli politicians and some newspapers is utterly baseless.

"Do you really begrudge kollel students this 700 nis a month"

Of course, the arts and college students get a lot of grants too that should be questioned and reconsidered.