Vatican Synod: Jews Are Not 'Chosen' and Have No Promised Land

Today's JPost reports that a Vatican conference of Bishops this past Shabbat, they demanded that Israel accept UN resolutions calling for an end to its “occupation” of "Arab lands."

"The Holy Scriptures cannot be used to justify the return of Jews to Israel and the displacement of the Palestinians, to justify the occupation by Israel of Palestinian lands,” Monsignor Cyril Salim Bustros, Greek Melkite archbishop of Our Lady of the Annunciation in Boston, Massachusetts, and president of the “Commission for the Message,” said at Saturday’s Vatican press conference.

“We Christians cannot speak of the ‘promised land’ as an exclusive right for a privileged Jewish people. This promise was nullified by Christ. There is no longer a chosen people – all men and women of all countries have become the chosen people.

“Even if the head of the Israeli state is Jewish, the future is based on democracy."

So...the Jewish people aren't chosen, we don't have a "promised land"...and Israel cannot be a Jewish State, rather a "democratic one" (hint, read "State of all its Citizens").


In their “Appeal to the International Community” the bishops expressed “hopes that the two-state solution becomes a reality and not only a dream.”

And the "2 state solution" is a Palestinian State (which will not allow Jews in, as clearly stated by PA President Abbas), and a "democratic State of all its Citizens" [which means not really Jewish"] 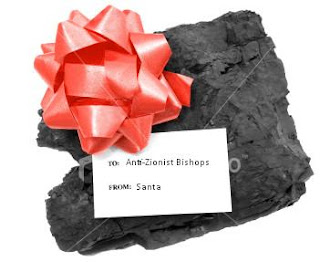 The only things these bishops will get from Santa this year will be a lump of coal...

...and more disappointment, as the Jewish people return to their homeland, fulfilling millennium-old Biblical prophesies, as we witness the in-gathering of the exiles and the blooming of the desert.

Consider the irony of people from one from the world's most exclusive theocracies lecturing Israel for being Jewish!

And is the Pope Catholic?

The Church may not longer care about G-d's promises but it would do well to remember that every nation that has hated the Jewish people has disappeared from history.

Its now facing its twilight and the resurrection of centuries-old anti-Semitic supersessionist theology and Jew hatred will not save it from its richly deserved fate.

And Israel and the Jewish people will still be around long after the Church and Christian Europe are a footnote in the history books.

That's let the cat out of the bag. I cannot say I am surprised only that they are saying what they really think (and are theologically compelled to think) and not the usual PC BS. If we were still the chosen people who would need the Catholic Church?

If they believe that God breaks covenants, how can they be certain that Islam has not superceded Christianity?

Palestinian Christians fleeing the territories probably has less to do with "the occupation" than with Muslim-Christian relations there, but it is as if, while the Muslims were making life difficult for the Christians, someone shouted that age old defense: "Look! Jews!"

It pains me to say this. I don't like saying this about the religion of so many of my friends, but they speak out of both sides of their mouths. They have to make excuses for the reason they believe the way they do and they call that faith and they make it worse by putting words in Hashem's mouth. This is such a pathetically sad situation.

Consider the source here--these are not mainstream bishops but a convocation of Arab bishops from Lebanon, Israel and surrounding territories. They have totally disregarded recent Catholic teachings on the Church's relationship with Jews because it fits their political agenda to resurrect the centuries old triumphalism and hate. This isn't "Church policy" -- it's hard-line, right wing, Arab policy expressed through Arab bishops and their sympathizers. There isn't a mainstream, highly placed, respected cleric among them.

Exactly... more less they are Arab Catholics trying to butter up to Hezbollah and other Islamists.

They may want to ride the back of the Islamist tiger but they can't be sure they won't get eaten in the end.

Jew hatred will get the Christians of the Middle East nowhere.

So, according to this guy, the Bible is nothing more than a political statement? Maybe someone should bring up those pesky crusades with the Vatican. History can be such a nuisance sometimes.
-OC

This has nothing to do with the pope. The pope is Roman Catholic.
This bishop is Melkite = Greek Catholic.
Melkite church is based in Lebanon and Israel and uses an Arabic Liturgy.

Better they should worry about pederasty in their own churches.

Guess we've had it all wrong, huh?

Glad they set me straight on the whole Scriptures thing.

jesus was the bastard child of the whore mary

pedofile priest hold no sway over israel or the jews

NUKE THE VATICAN...SAVE THE CHILDREN

Anon, thanks for pointing that out. I wasn't aware of that. Always good to have the relevant information, so you know where the source is coming from.
-OC

"And Israel and the Jewish people will still be around long after the Church and Christian Europe are a footnote in the history books."

Thank you for that anti-semitic comment. Muslims are so obvious with their hatred.

Jews are the chosen ones, always have been, always will be.