While Iranian President Ahmadinejad prances around his Lebanese colony threatening Israel and the West, foreign media have reported that a mysterious explosion has killed 18 Iranian Revolutionary Guards, and a fire is now raging in the storage facility of Iran's medium range Shahab-3 ballistic missiles.

(RTTNews) - More than 18 Revolutionary guards were killed and 14 others wounded in an explosion Tuesday at a base of the Islamic Revolutionary Guards (IRG) Corps in the Western Iranian province of Lurestan, reported Iran's official news agency IRNA Wednesday.

A Deputy Commander of the Corps said that blast resulted from a fire that spread to a munitions depot at the corps's base in Khoramabad, 300 miles southwest of the capital, Tehran, and close to Iran's restive Kurdistan region.

Police and fire-and-rescue teams were rushed to the IRG base and the injured were taken to a hospital in Khoramabad, the agency said.

Lorestan Governor General Hassan Shariatnejad visited the injured persons hospitalized and offered his condolences over the tragic incident. Local officials declared a two-day mourning Wednesday and a funeral was scheduled for Thursday.

Kudos to the pyromaniac responsible for the fire. 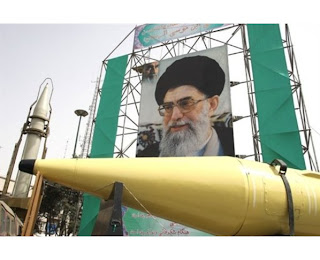 Update: 1:06 PM Two rockets were fired from Gaza at Ashkelon, resulting in air raid sirens. No reports of injuries, and the rockets apparently landed in open areas causing no damage.

where are the accusations that the Joos done it?