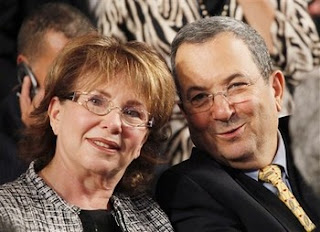 After a pathetic collusion of impropriety, Defense Minister Ehud Barak's wife, Nili Priel admitted that she illegally hired a foreign worker (named Virginia), and expressed her willingness to pay a fine, in a bid to put an end to the affair. (YNET)

Unfortunately, it took the efforts of right-wing, law-abiding citizens to bring about Priel's admission of guilt, since the State of Israel wasn't able to do anything useful.

The "Legal Forum for the land of Israel" initially filed the complaint with Israel's attorney general, against Barak 8 months ago. Instead of the police investigating the case, it was turned over to the ministry of labor, headed by Barak's good friend and Labor-party minister, Fuad Ben Eliezer. Surprisingly [not], they came up with nothing.

Even more surprisingly, the Shin Bet claimed they couldn't find the foreign worker. Barak and his wife said they had no clue how to contact Virginia.

So...what does Israel's State Attorney do?

The case against Priel was closed last week, when Attorney General Yehuda Weinstein said the foreign worker in question, identified as Virginia, could not be located.

As a result, last Thursday I personally heard a representative from the "Legal Forum for the land of Israel" on IDF Radio last week ask for the public's help in locating, "Virginia," since Israel's police and security services were unsuccessful.

Of course, "Virginia" was located the other day, and she asked what the big deal was, since she said that Nili Priel and Ehud Barak had her phone number!

Now that the Smoking Gun was located, Nili Priel decided to announce her guilt and she expressed "her willingness to pay a fine".

What a saint she is.

Priel and Barak should have to pay far more than a fine, and they should be indicted for obstruction of justice and interference in an investigation.

Along with the Barak mafia, the other characters who should go to jail are Fuad Ben Eliezer, the Shin Bet, and Attorney General Yehuda Weinstein.

I'm probably missing something here, but for the American audience, what's the big deal here, exactly?

Vox: Thanks - I probably didn't notice that it wasn't clear.

Israel is currently in the midst of a huge issue with illegal workers, and for a member of the government to have an illegal worker, working at their private residence, is not only illegal, but gives the worst possible message to the nation.

Then, add in that he manages to escape scott-free on the charges because "no one can find her" -- and the case is closed against them.

Then, we find out she does exist...and she says specifically that she was easily findable because the Baraks had her phone number.

Is this related to the issue with the children of foreign workers being deported?

>and for a member of the government to have an illegal worker, working at their private residence, is not only illegal, but gives the worst possible message to the nation.

This seems like a garden variety political scandal, to me. Every election cycle here a candidate is caught having an illegal Mexican or Ecuadorian nanny. Frankly, I still don't see what the big deal is that he and everyone else should go to jail for this.

Is Ehud Barak a particularly strong proponent of not hiring illegal workers? What is the message being sent to the nation, exactly, by Barak having an illegal worker? Was she privy to al sorts of state secrets or something? Recently, in Canada, the foreign minister was having an affair with someone and left secret documents lying around his apartment, or something. Is that what we're talking about? I still feel I'm missing something.

To me, the biggest deal here is with the shin bet/legal system.

IF Barak was a right wing politician I am sure they would have found Virginia in 2 heartbeats.

To me, illegal workers are a symptom of a broken immigration department, not a problem itself.

Is this the same state prosecution that cannot bring itself to clear Har Shefi's good name?

It only proves further there are two justice systems in Israel: one for the Left and one for every one else in the country.

Foreign cleaners are the best. They don't whine as much as Israelis. :(

I miss mine. Eh, tempest in a teapot. I don't blame Barak for employing her, he just should have been more savvy about getting her documents, which isn't that hard.

Come on, Jameel, it isn't as if Israel has some world-renowned security and surveillance services that can track down wanted fugitives at the end of the world. Oooops, wait a sec...

My favorite patented expression: "It's amazing what you find you're unable to do...if you really don't want to do it."

I, too, agree that this immigration issue is not so big, but the unvarnished hypocrisy is the issue...Everytime a non-Leftist drops a kleenex on the ground, the media goes berserk to lynch them.