A Joint Jameel/JoeSettler headline post being updated over the next 12-24 hours.

This post will be updated as new Israel related Wikileaks updates (and related events) appear.

Wikileaks has announced they will begin posting documents today consisting of communications from the US to its embassies regarding its allies. For the past week, the US has been trying to do damage control. The US claims that the release of this information will "place at risk on-going cooperation between countries".

Latest leaks and rumors on top.

11:59 PM One thing is clear. Arab states do not link dealing with Iran to the Arab-Israeli conflict. They all want Iran dealt with on its own.

Jordan is the only exception, but they are directly involved in the Arab-Israeli conflict and have other concerns they are trying to push forward.

11:36 PM Nothing overly exciting in the Wikileaks - yet.

Worst is that US seems out of touch with what the rest of the world wants and needs for safety and stability, and is afraid to act. Israel's positions were already known, so nothing new there. Livni's private statements contradict her public statements.

We haven't found the Muqata listed yet in Wikileaks. We're disappointed.

Biggest story is regarding Gaza war, that Palestinian Authority (Fatah) and Egypt refused to take control of Gaza if Hamas was ousted by Israel during Operation Cast Lead.

JS: Why even bother with that leak?


10:49 PM Tzippi Livni exposed as liar. In 2007 Livni said there is no way to reach a permanent settlement with Abu Mazen. Unlike what publicly tells Israel.

10:40 PM US spy activities against Israel and Palestinians: US attempts to acquire data and intelligence on Israeli communications infrastructure.

US tries to assess likelihood of PA officials turning weapons against Israel and US. Actual relationship between Hamas and Fatah. Internal PA support for terrorism.

Biometric info on everyone.

10:26 PM Israel asked Egypt and Fatah (Palestinian Authority) if they would take control of Gaza if Israel removed Hamas during Operation Cast Lead in Gaza. Both said no.

10:21PM Mossad assessment that Iran was playing US/world for time until weapons developed.

Israel believes Iran used Red Cresent to sneak spies into other countries in 2006.

10:16 PM Iran has missiles that can reach central Europe.

Wikileaks reveal that Israel and Arab states pressed the US numerous times to deal with Iran's nuclear program in years past. Ehud Barak said that US must deal with North Korea and Iranian nuclear programs. Lack of US response to North Korea would send message to Iran.
Mossad pushed for covert measures and regime change.
Israel said in 2005 that Iran would have nuclear weapons by 2010.

8:10 PM Israel's Channel 10 TV reports: The Wikileaks show that PM Netanyahu was worried the Iranian nuclear reactors would go on-line within months of 2009, yet the Obama administration scoffed at the idea. 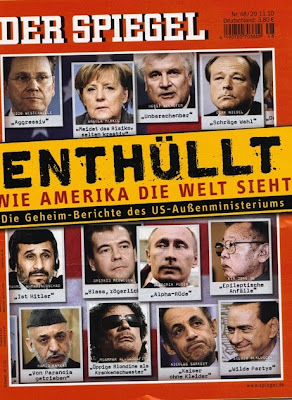 7:45 PM JERUSALEM: Several of the documents set to be published by WikiLeaks this weekend are believed to show the US has been helping Turkey's Kurdish separatist movement the PKK, or Kurdistan Workers Party.

The PKK is listed as a terrorist group in Turkey, the US, the European Union and Australia.

The claim is reported in the London Arabic-language newspaper Al-Hayat. (source)

7:21 PM ROME, Nov 28 (Reuters) - The expected release of classified U.S. documents by Wikileaks will be the "9/11 of world diplomacy", Italy's foreign minister said on Sunday, urging Italian prosecutors to investigate the whistle-blowing website.

Foreign Minister Franco Frattini, on a trip to Qatar, said he did not know the content of the files to be released but warned they would"blow up the relationship of trust between states", according to Italian news agencies.

"It will be the September 11th of world diplomacy," he said.

7:17 PM El Pais, Le Monde, Speigel, Guardian & NYTimes will publish many US embassy cables tonight, even if WikiLeaks goes down.

6:33 PM Wikileaks announces they are under massive Denial of Service attack.

6:29 PM Receiving reports that some people can visit and some can't. Probably overloaded.

6:20 PM Wikileaks site crashed, overloaded or has been taken down.

"Prime Minister Benjamin Netanyahu discussed expected release of classified State Department documents on WikiLeaks, saying that the United States "didn't specifically indicate what will be exposed. I don't think Israel is the center of attention."

Netanyahu added that "is it customary for there to be an information gap between what is said publicly to what is said privately. When it comes to Israel, the gap isn't too big. As far as other countries are concerned, the gaps are very very big. We shall wait and see."

5:22 PM Britain Braces: "An 'embarrassing' assessment of David Cameron by the the U.S. administration is set to be made public on the WikiLeaks whistleblowers website.

The harsh analysis of the Prime Minister is among thousands of leaked State Department files set to be revealed imminently on the site.

And Gordon Brown's rocky relationship with President Barack Obama is almost certain to mentioned as is Britain's troop withdrawal from Iraq." (Daily Mail)

5:15 PM Germany's Der-Spiegel reports that the WikiLeaks contain information that the USA has an agent operating inside Germany's government, from the liberal FDP party. (source)

5:06 PM Israel on "high alert" -- "Another Israeli official added that the American Embassy in Tel Aviv had been calling Israelis named in the documents in order to warn them in advance. The list includes officials in the Foreign Ministry, as well as aides to prime ministers, this official said." (JPost)

4:49 PM Speculations abound that the WikiLeaks will reveal that Israeli officials have been providing classified information to the USA in exchange for money (rotter.net)

The Obama administration on Sunday told whistle-blower WikiLeaks that its expected imminent release of classified State Department cables will put "countless" lives at risk, threaten global counter-terrorism operations and jeopardize US relations with its allies. [Jameel: by telling us what the State Department really thinks of Israel? We've been writing it on the muqata blog for years...]

In a highly unusual step reflecting the administration's grave concerns about the ramifications of the move, the State Department released a letter from its top lawyer to WikiLeaks founder Julian Assange and his attorney telling them that publication of the documents would be illegal and demanding that they stop it.

The letter from State Department legal adviser Harold Koh was released as US diplomats around the world are scrambling to warn foreign governments about what might be in the secret documents that are believed to contain highly sensitive assessments about world leaders, their policies and America's attempts to lobby them. [Jameel: The USA wants Tzippi Livni as Prime Minister? What a shock.]

"They were provided in violation of US law and without regard for the grave consequences of this action," he said. Koh said WikiLeaks should not publish the documents, return them to the US government and destroy any copies it may have in its possession or in computer databases.

4:24 PM Washington specifically warns Israel of "potentially embarrassing" leaks (Breitbart) Rotter.net reports that the US has pulled CIA spy operatives out of Israel so that Israel can't retaliate and imprison "Pollards" for spying on Israel for the USA.

The US has spent the last weekend taking down file-sharing and bit-torrent sites and seizing domain names. A theory behind that is to slow down the proliferation of the Wikileaks documents. A little over the top for my taste. 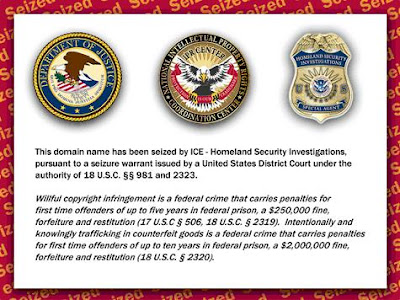 Others say that local leftwing Israelis are going to be named as sources for much information.

And one particularly interesting theory is that it will reveal what the US knows about secret Israeli operations, and officially link them to Israel (Syria nuclear plant strike, Abu Dhabim Stuxnet, etc.)

Personally, we're expecting at least one remark about the Muqata being an obstacle to peace (and a voice of reason).

As the Wikileaks released we'll let you know of anything important we (or others) find.

what could possibly damage us/israel relations worse from what obama has already done?

Can you tell us who's nervous about this release? Is it just the Americans, LW NGOs, etc? Or are the RW / Bibi nervous too?

We haven't heard anything here about the Israeli government being nervous.

Thanks for this important public service!
You're part of what makes the blogosphere so much more relevant than the MSM.

This could be VERY big...and right in time for Chanukah.

Besides all the hype surrounding what will be on and what wont be leaked, the actual site itself currently seems relatively boring with only the Iraqi stuff still on show. No countdown to when stuff will be leaked etc

Its called a "feint" - make a sudden movement and quickly pull back then watch the reaction of your opponent. Very helpful in a lot of situations.

Jenny: I see no reason for Israel as a country to be nervous.

Perhaps some individuals will be embarrassed for having spied for the USA, but nothing would really surprise me.

I won't be shocked when it's revealed Tzippi Livni works for the American government, working to further their agenda.

Re: Massive DDOS - what did Wikileaks expect ? That the US Govt sit back and take it just like that. For them it is blatant outright war - and they are out to show who is boss.
Hope WikiLeaks survives for our own sakes ...

They might not, but the info will get out none the less. The "insurance file" was released last night. It sure makes me wonder what's in it.

I believe the NYT's special website devoted to the cables now available here:

No chiddushim but interesting.

I found intersting that so many ME states urged the USA to attack Iran and stop their nuclear program - and the US just keeps on ignoring them. NYT has cables that say that from Bahrain, Abu Dhabi, Saudi Arabia, and ISrael - all American allies.

It is not new that Obama does not listen to ISrael, its ally, but I thought it interesting that he didnt listen to his Arab allies either. He keeps on trying to engage enemies.

You guys are great. Keep up the amazing work.

The Egypt/Fatah issue is not that surprising. I think Abu Mazen even said it publicly.

They can't have Israel conquering Gaza for them.

Er, hello! These cables span 30 years- they're not just about taking down the Obama administration!

What is more amusing is that none of you seem to realise that the radical left is just as excited about the revelations of the cable contents as you lovely people on the extreme right seem to be. You should check out the Guardian website, it is positively ablaze in celebration of America overturned.