It's fair question. After all, if and when we negotiate with them (and not with the Obama administration) it would be good to know what it is they really want and see as their endgame.

The Israel Project ran a comprehensive poll that tried to understand exactly what they want.

Some of the answers were seemingly contradictory (at first), while most answers were quite clear and consistent. A statement left open and undefined ("peace") received a positive answer, but when the actual terms of what "peace" included was defined (see last graph on this post), it was then overwhelmingly rejected.

To begin with, most Palestinians want to live under Sharia law. 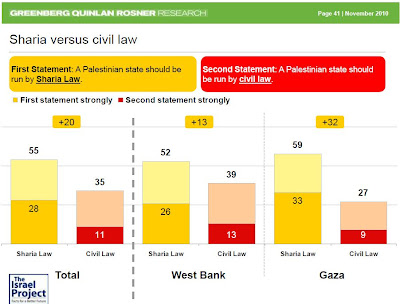 Surprising at first, most Palestinians want a 2 state solution. 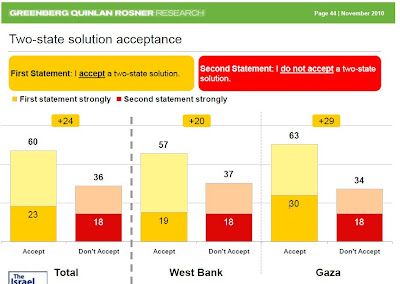 But not so surprising when asked to explain that position.

Most Palestinians see a 2-state solution as a stepping stone to replacing Israel with one Palestinian state. 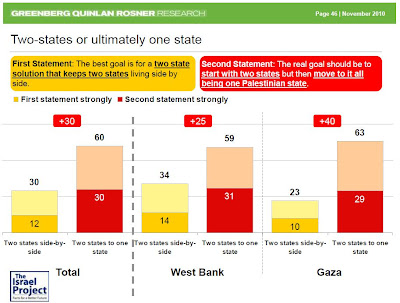 To achieve that 1 state of Palestine solution, most Palestinians approve the use of violence against Israel. 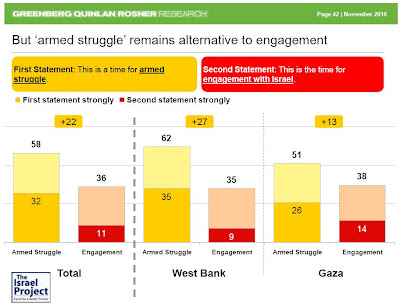 Most Palestinians do not accept the existence of a Jewish state and believe it must be actively destroyed. 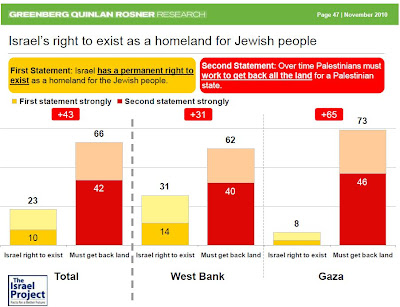 And finally, most Palestinians do not expect there to be a Jewish state in 25 years. 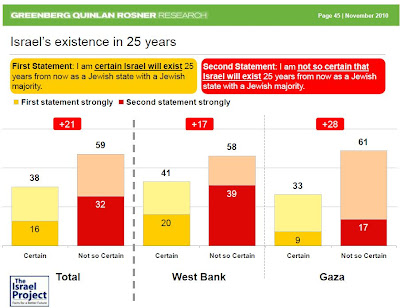 In short, the Palestinian position seems to be that Israel should be destroyed and replaced with a single Palestinian state, and the means to do so should be through both negotiations and violence.


Now here is the kicker. When "peace" was defined with the maximalist (peace) terms Israel already offered, and terms that Israel would/could never offer more than, and in fact, presumably the minimum that Obama is trying to get Israel to agree to now (in his secret plan), "peace", now defined, was overwhelmingly rejected. 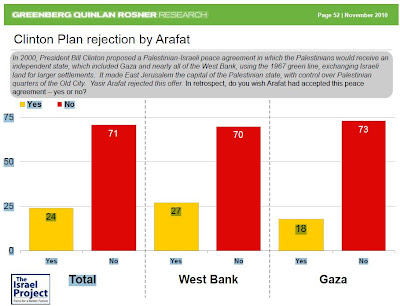 Ultimately, what this means is that "Palestinian" society is not looking for an end to the conflict or for peace, but rather sees negotiations as another means to destroy Israel.

The Arab apparently selectively define and understand the premises and goals for Peace very differently than Israelis do.

What is the chiddush?

We dont need a study to prove this - just listen to what the leaders of the "Palestinians" say.

I dont think this study will convince leftists or our current leaders that they are wrong.

I second what Chana says.

But also, The citizens needs to buckle up and be prepared. Our leaders are selling us down the river. We need to get active.

I'll never understand why Israel's dhimmi Jewish leaders believe peace is possible with those who make no secret of their intention to destroy Israel.

They cannot give away the Land Of Israel for the simple reason it is not theirs to give away and the more they try the more they are frustrated. Rebellion against Heaven is futile.

It is time to obey G-d and accept His gift. It will only help the Jewish people face what is to come.

Since the polls and studies and ALL research has pretty much indicated total annihilation of the jewish state through violence or negotiated means... then why bother dealing with anyone?

Hang the phone up and treat them like the wild west. Cut off all ties, and excommunicate anything or anyone from gaza/westbank... revoke all working permits/visas... in effect a blockade.. but only from one side, Israels. The other side can be open... up to those nations to deal with the problem for once.

Any aggression in the form of rockets is an act of war, and Israel can simply do what it's done in past wars... pump shells and take territory in self defence.

Hopefully it can rectify past mistakes and heave all those lebanese, jordanian, and syrian refugees back back to where they came from.

"Israel's existence in 25 years" graph - represents the Arabs' pessimism. Many more arabs desire Israel not to exist than those who think that 25 years will be enough time to get the job done.

The Arabs are a bit pessimistic because they have failed time and time again.

Irgun Heroes: That is funny.

Is there any indication that these polls are being seen by people outside of your ideological circle?

Even if they are seen outside of my ideological circle, do the people seeing it care enough to act on it, or is it in there interest to take it into account?

Wait a minute. You seem to be interpreting the questions a bit too much.

Question three is not, "should a 2-state solution be a stepping stone to replacing Israel etc." It is, "should the two States be replaced by one state". What 2 states are being discussed? From a Western media POV, it's obviously Israel and Palestine. From an Arab POV, it may be the West Bank and Gaza, which should live side by side for now (not necessarily bordering; what does the Arabic equivalent of "side by side" mean to the Arab man on the street?), and in the future merge into one state. Why not start with one state if that's the ultimate goal? Non-contiguous land masses, for one.

About Israel's existence, the question wasn't one of desire, but expectations. There are many people who think that various things will cease to be, that doesn't mean that they necessarily want that result (there are people whom I love who I do not expect to be around in 25 years, it doesn't mean I want them gone).

The last question is unfair. It presented an offer, and then said that Arafat, who, IIUC, is still pretty well respected by the man on the street, rejected this offer. The question changes from, "what do you think of this offer" to, "did Arafat, in your opinion, make a mistake". Not surprising that only about 1 in 4 Palestinians were able to admit that Arafat made a mistake.

In no way do I think that the results are incorrect. However, when a poll is taken, the questions themselves are extremely important. This poll tells more about the abilities of the poll-takers to create an objective poll than it does about Palestinians' positions regarding Israel.

There's also the question of in a regime such as exists in the West Bank/Gaza, how many people who don't necessarily support the destruction of Israel are willing to go on record as such. Any claims that the results are confidential, etc., would probably be suspect, especially when the respondent could feel that his life is on the line.

Your last point is incredibly important.

It leaves open 2 possibilities (neither good):

1) The majority of Arabs want to see Israel destroyed.

All my points are incredibly important.

Haaretz is often read by people outside of JoeSettler's ideological circle:

Yoni, true, but I was already thinking of that last point as it relates to Sharansky's theory on repressive governments.

Your 2-state interpretation was very amusing.

The Muqata is also read by people outside our ideological circle.

We have readers from the NIF, J-Street, and other anti-Zionist organizations regularly visiting.

We also have Arab visitors from the PA and other Arab states (they even send us email).

How is this possible since the Palestinians are really Jews!!!

Yoni made an important point: No Palestinian is going to ever defame Arafat, even beyond the grave, for his decision to not be bulldozed by Clinton (sic).

Within Palestinian culture, declaring loyalty and outwardly remaining faithful to one's leader and the resistance is paramount. (Hamas would support the fact that he didn't take that decision on their behalf for different reasons.)

Re this survey- anyone (we evil leftists included) who interacts with Palestinians will not raise an eyebrow, there's nothing new here. BUT even with the details provided on the TIP site, we don't know enough about the survey- eg what language it was carried out in, male/female rations, and crucially if the respondents had any idea that their opinions would be used for a body called "The Israel Project", or, as your commenter Yoni R points out, if they were convinced of confidentiality.

However, if the face value you see here is enough for you and your readers to start jumping up and down with glee and proclaiming the need to carpet-bomb Gaza etc... I'm not about to try and stop the slathering.

This poll result is as enlightening as a study concluding that water is wet.

The final question, about the Clinton proposed agreement, present this agreement as a simple yes/no to peace. But the reality was much more complicated. The question is 'what exactly had been offered to the Arafat?' and there's an argument about the offers. Certainly, if Arafat was there to represent the Palestinians, why they would think different? If Ehud Barack was the opposer, would there be majority of Israelis who would think otherwise?

More, detailed information about the complicated story of Camp-David 2000 peace process can be read here http://www.mideastweb.org/lastmaps.htm
or in wikipedia (look for camp david accords 2000, or just israel-palestine peace process)