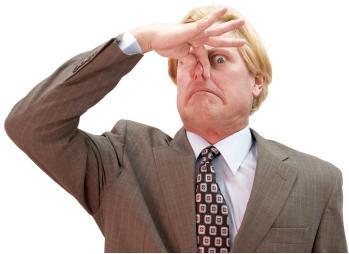 Though this sounds like a Purim joke, someone apparently invested huge amounts of money in this idea.

Globes and A7 have the stink:

Israeli computer and telecommunications giant Comverse has unveiled a multi-sensual feature for cellphones.

Presented on February 16 at 2010 Mobile World Congress, Comverse's new feature will enable callers to send smells. Comverse hopes to convince mobile operators to purchase the application, which will absorb and transmit the scent of the caller's environment or cologne to the person he or she is calling, according to Globes online business magazine. The scent may also be used as identification of the caller. [a7]

Multi-sensual communications enables the caller to add the aroma of his or her environment or a personal scent to an SMS. The recipient will be able to identify the sender by his or her scent, or perhaps realize that the sender is in a cafe.

Comverse Chief Innovation Officer Daphna Steinmetz said, "This is technology that in future will transmit molecules via the telephone. We can currently provide this as a pilot on just one Nokia handset." [globes]

Tell me, do you really want to know what the person on the other end of of your call smells like?

I'm sure this technology will get integrated quickly into SKYPE...and then its only a matter of time before this becomes a Facebook App as well - Rate your friend's smell!
Ungh.

PS: There used to be a parody called "Smell U - Smell Me" technology. I guess yesterday's parody is tomorrow's technological reality. Heh -- Lurker found it for me.

I have always wanted an app that "smells" trempers and rejects the stinky ones. After this, i guess that can't be far behind.

Cool article you got here. It would be great to read a bit more concerning that matter. The only thing I would like to see here is a few photos of some gadgets.
John Stepman
Cell jammer

I can't think of anything I'd like less. Too funny though. :-)

Anonymous: Keep in mind that while tempting, cell phone jammers are in many places illegal.

Thanks for the long laugh. I needed it.

"The recipient will be able to identify the sender by his or her scent,"

What's wrong with voice? It's been working all these years.

I never thought that this app will be invented in our century. Kudos to the new the technology we are facing right now. Just hoping these technology won't slave us in the near future.