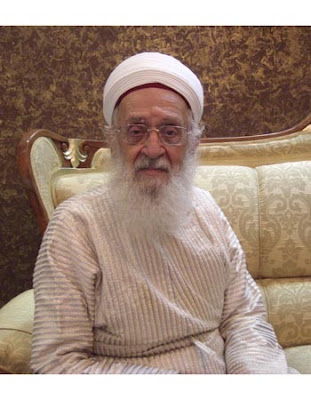 Elazar Ben Tzadka, the Shomron/Samaritan "Cohen Gadol" [high priest], died yesterday (Wednesday) at his home on Har Greizim -- he was 83.

His funeral will take place this afternoon at the Samaritan cemetery on Har Greizim.

Tzadka was born in Shechem in 1927 and served as the Samaritan Cohen Gadol for the past 6 years.

Attending his funeral will be the Samaritan community from Har Greizim, and its Israeli sister community from Holon, as well as leaders from the Israeli and Palestinian Authority political systems.

The Har Greizim Samaritan community suffers from a twilight zone reality, as they are not part of the Jewish people -- and they are under the administrative control of the Palestinian Authority. Their children speak Arabic, attend Palestinian schools in nearby Shechem, yet Palestinians routinely harass them -- and have even stolen their ancient Samaritan Torah scrolls. The scrolls are currently held for a ransom of millions of dollars, which the community cannot afford. The Israeli community of Samaritans in Holon are full fledged Israeli citizens, and serve in the IDF.

According to Tzadka's brother Benny, the replacement Cohen Gadol will be, Aharon Ben Av-Chisda.

You can read more about the Samaritans in previous Muqata posts:

i wonder if they have arei miklat (shelter cities for people who accidentally commit murder) and if they get to go free, now that the cohen gadol died..

Yitz: Thats a fascinating question...since they definitely have the concept of Arei Miklat from their Torah.

I'll try to look into it.

yitz..: i wonder if they have arei miklat (shelter cities for people who accidentally commit murder) and if they get to go free, now that the cohen gadol died..

(1) The idea that a killer may leave an ir miklat with impunity after the death of the kohen gadol can be found only in rabbinic sources. It is not written anywhere in the text of the Torah, so the Samaritans are unlikely to subscribe to that concept.

(2) The Samaritans are a microscopically small community of only a few hundred people. They have only two population centers -- one on Har Gerizim, and one in Holon. They have no practical ability to maintain arei miklat in the first place.

(3) Before asking whether Samaritans have arei miklat, why not ask first why Jews don't have them? The answer is quite simple: The very concept of arei miklat has been made irrelevant in the context of modern legal systems: The whole purpose of an ir miklat is to provide refuge to an accidental killer from the victim's go'el dam, who was seen as having a legal right (perhaps even an obligation) to avenge his relative's death. But modern law does not recognize such a right, and if a relative were to actualize that "right", then he would be arrested by the authorities and charged with murder. Therefore, the accidental killer has no need of an ir miklat in the first place.

wow, interesting post, and yitz asked the same question that immediately popped into my mind. sounds like lurker answered it very well. thanks to all involved.

jonathan: well - we do try to keep things interesting here!

(And I took Lurker and family to meet the Shomronim as well...)

thanks for clearing that up, i thought it was in the mikra but I hadn't had a chance to double check.

re: #3, that sounds interesting but is at odds (imho) with how a large portion of the religious Jewish population views mitzvot d'oraita.

Gee a Moron: Excuse me but the concept of sitting in ir miklat until the death of the cohem gadol is in the written Torah (at least the Jewish one): Numbers (Bamidbar) 35:25 parshat Masei...

You are absolutely correct. I humbly admit that I completely forgot that, and mistakenly recalled that the provision for a killer to be released from an ir miklat was exclusively from the Torah she'be'al peh -- but that is incorrect. [*wiping egg off face*]

I think that I somehow conflated in my mind the law of release from an ir miklat, with the law of release of an eved Ivri who chooses to remain with his master after his six years of servitude have completed. The Torah says that such a slave must have his ear pierced by his master, and that he then becomes the master's slave "forever" ("לעולם") [Shemot 21:6, Devarim 15:17]. The Torah she'be'al peh, however, does not interpret "forever" literally, understanding it instead to mean until the Yovel (Jubilee year). And I confused the the halakha of the eved Ivri's release, with the halakha of release from an ir miklat.

'Shkoyach, and thank you for catching that rather big error on my part.

I should note, however, that my other two reasons why the Samaritans wouldn't have arei miklat still remain valid.

It's possible the conflation comes from the rabbinic teaching that the mother of the kohen gadol would provide food and clothing for the exiles, hoping that way they wouldn't pray for his death - לפיכך אימותיהן של כוהנים, מספקות להם מחיה וכסות, כדי שלא יתפללו על בניהם שימותו(Mishnah Makkot 2:6).

yitz..: re: #3, that sounds interesting but is at odds (imho) with how a large portion of the religious Jewish population views mitzvot d'oraita.

I'm not sure what you're saying here. What is at odds? The institution of goel dam is no longer practiced, and I'm sure you don't disagree that modern judicial systems would not allow it. Therefore, an accidental killer has no need of an ir miklat to escape to.

How do you see that as being "at odds with how a large portion of the religious Jewish population views mitzvot d'oraita"? Surely you're not questioning the obvious fact that no modern judicial system would tolerate a goel dam exercising his "right". And in point of fact, there are no arei miklat today -- neither by the Samaritans, nor by us. This is an undeniable fact, too.

First, the biblical concept of Ir Miklat is refuge, but the rabbinic concept is one of exile as part of atonement (The mishnaic chapter on arei miklat begins "Eilu hen ha-golin)- something like prison. But anyway as we don't do dinei nefashot today, there is no way the halakhic system of galut could be implemented - w/a 23-man bet din at the entrance do decide who belongs inside and who does not, etc.

Second, Lurker, even the Eved Ivri is not only Torah shebeal peh. In Mishpatim (Ex 21:6) and Re'eh (Deut 15:12-17) it says one who dies not want to leave after 6 years stay "forever" (לעולם), but in Behar (Lev 25:40) there is no 6-year clause, and no option to remain an eved, but rather he is freed by the Yovel. What TOSHBA does is to decide how to keep both laws. On this issue and imilar ones, I highly recommend the work of R. Mordechai Breuer and his students (even if you disagree w/him on Bereshit etc., I find him much more convincing when dealing with halakhic passages).

We were taking some time today browsing some information for our blog. As we were searching for news and resources, we landed in your site. We were happy to see your links page containing resources of relevant categories. We would be glad if you could provide us a link.

Here is our link information

Actually, Masechet Makkot makes it clear that it's not an accidental murder who goes to an Ir Miklat, but a negligent one- what we would call "manslaughter" today. So we do have something similar: It's called jail, to which the killer goes for a certain amount of time (but not life). Obviously, there are many differences, of course.