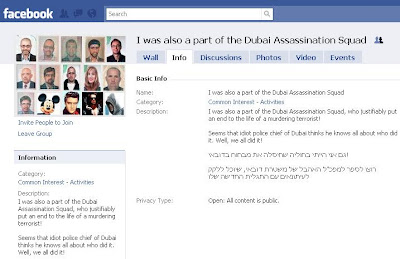 Feeling depressed that are aren't among the millions of people around the world who work for the Mossad? Upset that the Dubai Police Chief hasn't personally named you as a chief assasin yet? Now's your chance -- you too can join the "I was also in the Dubai hit-squad" Facebook group. Click here to join.

JoeSettler reports that someone (with way too much time on their hands) opened up facebook personality accounts for every single "assasin" listed by the Dubai police, complete with pictures, hobbies, etc.

Supporters of Mossad are showing their pride sales of T-shirts glorifying the spy agency have risen tenfold since it was linked to the murder of Mabhouh, a leading mail-order company of Israeli products told the Irish Times.

Imagine how shocked I was to learn that my one year old grandson was part of the squad. At least he won't talk.

People's pets have joined the top secret group as well.

I hope they keep adding more and more famous members to this list.
It's not Dubai
it's Dumbai!

Darn it - I have been trying to avoid joining Facebook for YEARS now - I mean, the LAST thing I need is ANOTHER site with my info out there - but you had to go & tell me about this!!!!

Is interesting that dubai has a facebook site, i think that facebook is one of the best media social network where we can published a lot of things, is like a diary or something similar.

I think that facebook is the most important social network,so, all the companies must have facebook profile.