Honestly, one learns something new every day.

For instance, 2 weeks ago I commiserated with Naomi Chazan on the unusual police treatment some Left-wing protesters received (unusual for Left wingers), in protests that friends and co-ideologists of Chazan are involved with.

Last week, I became aware that these protests are far more sinister than I initially understood and there is plenty of indication that they are all organized (including the ones in Jerusalem) by the same groups of people, and in my opinion, are part of an organized Intifada being led by the Israeli left, and so I retracted and apologized.

Lurker found enough overt statements and claims of responsibility by these various radical left NGOs (claiming that they were heavily involved with and behind the multiple protests from Bi’ilin to Jerusalem) to make that assessment quite credible.

Fellow blogger, Purple Parrot strongly disagreed with Lurker’s research (and if I understand her correctly, she claims that all these NGO are all just jumping on the Sheikh Jarrach bandwagon), and during the back and forth she happened to mention the organization “New Israel Fund” (NIF).

As I just mentioned on my blog, some MKs, including Center-Left MKs want the NIF investigated, as apparently the NIF may have funded most of the NGOs that testified to Goldstone against Israel. Of course the Far-Left MKs are upset by the calls for the investigation against the NIF.

Now here is where it gets interesting.

I’m sure most of these NGOs attacking Israel are very hard working, but decent?

But going back to the NIF, my whole interest in this began with Naomi Chazan’s article. 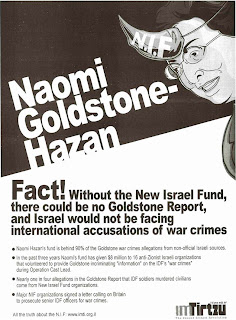 Now, I’m sure most Leftists knew this already, but since I don’t normally follow Leftwing politics, I wasn’t aware of it until today.

Naomi Chazan is the President of the New Israel Fund.

Most of the NGOs testifying against Israel to Goldstone receive funding from the New Israel Fund.

The obvious question is, how many of the NGOs involved in Ni’ilin, Bi’ilin, Sheikh Jarrach are also funded by New Israel Fund? Because that certainly makes her article even more suspect in my eyes. Some definitely do (such as ACRI – mentioned in the Chazan article), but it would certainly be interesting (but not surprising) to find out if most, if not all, of them receive money from the NIF.

Now much of the information that was revealed about NIF funding the various groups testifying against Israel came from an organization called Im Tirtzu – a student organization who are pro-Israel, and some came from the investigative efforts of NGO monitor.

The NIF consider themselves a ‘big tent organization’. They apparently don’t get their hands dirty. They outsource. It’s amazing how many organizations the NIF is apparently providing funding for that most people would consider anti-Israeli, such as organizations that call for divestment from Israel, or have ideologies that are in opposition to the concept of a Jewish-democratic state.

The NIF is of course hitting back. According to the JPost, they are responding by calling anyone who criticizes the NIF and Chazan as being part of a “smear campaign” (where did I just read that?), though not apparently denying or refuting (to the best of my knowledge) the various claims being publicized about them.

What Im Tirtzu and NGO monitor also uncovered is that Richard Goldstone sits as a board member of 3 (count them, three) organizations that traditionally accuse Israel of various war crimes and crimes against humanity.

Now what is also interesting is that all 3 organizations are funded by the Ford Foundation.

But do you know what other organization is funded by the Ford Foundation?

If you’ve read this far, then it wouldn’t surprise you to learn that it’s… wait for it… the New Israel Fund.

Read more here on all that.


(It’s also interesting to note that George Soros, through his Open Society Institute also donates to the New Israel Fund and to projects run by the NGOs funded by the NIF.)

So what’s the point you may ask?

I was just thinking of other money networks that exist for the purpose of destroying Israel, and the parallels here are just giving me the shivers.


Anyway, the accusations are apparently serious enough to worry about, that a Knesset subcommittee (under the Law and Justice Committee) will be specifically investigating the New Israel Fund - where their money is coming from, and just as importantly, where it’s going to.

I am sure the NIF will be given a chance to defend themselves against the specific accusations, and I am sure their defense will need to be a bit stronger than it a “smear campaign” against a big tent organization.

It certainly is amazing that so much that is going on here all seem to be interconnected through the same central hubs and individuals.

Joe, this is a scary post. Outstanding research, and yes one can always follow the money back to the source.

Even more details here in the JP.

Joe: Did you know that the NIF is supporting an organization whose mission statement is to educate Israel about the "Nakba"? (And calling for the right of return?)

Ha, you guys are in trouble now. The NIF is threatening to sue Im Tirtzu and any newspaper who repeat their findings.

I was listening to the hadashot this morning. After what the newsman said and Hazan's official statement in response, the NIF sounds like a HAMAS CHARITY that transfers funds to their "independent" military and political wings, while remaining a "clean" charity to the uninformed observer, and a laundry(funnel) for those in the know.

Would you clarify what this investigation would be looking into? Did they encourage lying to Goldstone? If so, what sort of legal violation is that? Presumably there is nothing illegal about giving money to far-left NGOs. What are the allegations that the probe will look into?

I suspect that this is a fact finding mission, and an initial attempt to shine some light on the activities of the NIF and related NGOs.

It will be very interesting to see what gets uncovered and if it has legal ramifications.

Certainly, if nothing else, as was just shown with the Melbourne synagogue, donors were apparently not necessarily aware as to what activities their donations were actually funding and assumed they were going to issues they supported.

The humor in the picture of Naomi Hazan with the horn ("קרן") only works in Hebrew.

Joe- want to answer "Jeremy", who is right in saying that there is NOTHING illegal about giving money to far-left NGOs?

I'm older than you, so here's the 1986 report on NIF: at MyRightWord

Joe- Two more things. (But I'm NOT getting drawn into a big discussion this week, I've got too much work to do, I'm sorry.)

1) None of this is new information, you've not uncovered any "money trail", being as all these orgs are very transparent about their funding, their board members and their agendas. For example, Zochrot, (whom I presume Jameel is referring to) has never pretended otherwise about it's agenda, and has been discussed here (and when I used to blog) for years. In short- find another wheel to reinvent.

2) You know perfectly well that if I or anyone else were to mount similar "research" with regards to some of the hard-right organizations more to your political liking, I could come up with equally "damning" conclusions on all fronts. And you all know I'm right.

Now- as a closing warning: If you carry on like this, not only are you not going to have any readers left who aren't already your hardline converted, but also, you're going to drive yourself insane with rabid, unfocussed Leftie-hatred. And the left that you so hate, (with the exception of me and maybe a few others who comment here occasionally) are increasingly not going to take your ranting seriously when you're essentially presenting information that isn't new to any of us, and basically making a laughing stock of yourself and Jameel's blog.

Have a good week y'all. Again, I won't be back to this or any other thread, so take my comments as food for your own thought.

Isn't it great that Tafka stoped by so we know there's a looney, crazy Left out there?

Jameel, you use the name "Sheikh Jarrah" to refer to buildings and related protests on what Jews called before 1948 the "Shimon haTsadiq quarter". Arab irregular forces drove the Jews out of that neighborhood in December 1947. Hence, this was the first neighborhood in the country where the population was driven out in the war and could not go back afterward since their homes were enemy-occupied. That's significant.

by the way, the British helped drive the Jews out of their homes in both Shimon haTsadiq and the nearby Nahalat Shimon quarter.

pp: I believe I answered Jeremy in my comment above.

I honestly believe that you don't really understand what the uproar is about.

Going on the "offense", Ha'aretz just ran an 'expose' on the Central Israel Fund and Im Tirtzu. And you know what? No one cares.

Because they (like you, no disrespect) are missing the point.

It will be an interesting post when I discuss why the Israeli left thinks it's OK to give money to the defense fund of a Palestinian terrorist like Marwan Barghouti, but believes that Israeli terrorists or criminals don't deserve their legal help or representation - if they believe they have a right-wing ideology.

Can you imagine if the ACLU acted like that?

It's an Israeli leftist thing - and that's why this is such a big deal.

Mainstream Jewish Liberals (not Radical Jewish Leftists) in the Diaspora and Israeli Leftists are simply not on the same page on the fundamentals such as Zionism and Civil Rights.

The NIF presents itself as Liberal, but in fact it is Leftist and there is a big difference and that is why this is all such a big deal.

Correct. I should use the right term, the Shimon haTsadiq neighborhood.

Presumably there is nothing illegal about giving money to far-left NGOs.

And a disgrace to play into the hands of the UN like that.

Can someone please explain why that is different from the Neturei Karta? Honest - I'd rather not make that association but that's where my mind is jumping.