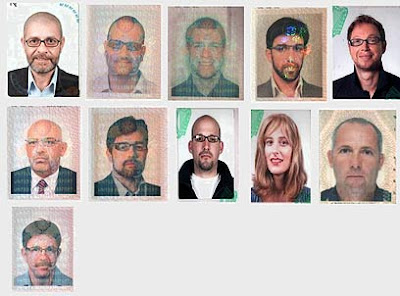 Facebook friends? Or an alleged Mossad hit squad that took out Senior Hamas Terrorist Mahmoud al-Mabhouh in a luxury hotel in the Gulf emirate last month?

The guy at the bottom left looks like MK Uri Orbach, and the second row guy in the middle could be Tipex singer Kobi Oz (or CK from Jewlicious?).

That woman is familiar too. "Gail Folliard" from Ireland?

A man in Israel with the same name as an alleged member of a hit squad that assassinated a top Hamas militant in Dubai said on Tuesday he was "angry, upset and scared" over what he called a misidentification.

Dubai police listed "Melvyn Adam Mildiner", a British national, as one of 11 Europeans suspected of killing Mahmoud al-Mabhouh in a luxury hotel in the Gulf emirate last month.

Speaking in British-accented English, Melvyn Adam Mildiner, resident of a town near Jerusalem, told Reuters he had nothing to do with the assassination and had never been to Dubai.

"I woke up this morning to a world of fun," he said in a sarcastic tone, after Israeli newspapers splashed names and photos of the suspects distributed by Dubai.

"I am obviously angry, upset and scared - any number of things. And I'm looking into what I can do to try to sort things out and clear my name," he said in a telephone interview.

"I don't know how this happened or who chose my name or why, but hopefully we'll find out soon."

A photo of "Melvyn Adam Mildiner" released by police in Dubai did not match a picture of the Israel-based Mildiner on his Twitter social networking page, though it had some similar features.

"I have my passport. It is in my house, along with the passports of everybody else in my family, and there's no Dubai stamps in it because I've never been to Dubai," he said.

Acknowledging that his name was uncommon, Mildiner said: "There's probably not many of us."

Meanwhile Ireland announced that the trio of alleged Irish passport-holders identified Monday in Dubai as Gail Folliard, Evan Dennings and Kevin Daveron do not appear in Ireland's records of legitimate passport-holders.

"We are unable to identify any of those three individuals as being genuine Irish citizens. Ireland has issued no passports in those names," the department said in a statement to The Associated Press.

The government says the Irish passport numbers publicized by Dubai authorities also are counterfeits, because they have the wrong number of digits and contain no letters.

Whoever they are...kudos on a successful take down of a Hamas terrorist.

The saudis are idiots ! - do they really think that
a) all the European countries are going to own up, and say - 'yep they're our people' ( thereby bringing a rein of terror on themselves ).
b) The people who did this are all going to carry real passports ! - like there are no fakes running around.

Anyway, as Jameel wrote - great work - who-ever it was done by.

Can't even recognize me with that wig and glasses on.

The reason why I don't think it's Mossad is because Mossad would be 1000 x more professional and make sure they were NOT being filmed!

You can't not be filmed in Dubai.

Why would Mossad have used passport details of real people living in Israel? That's just asking for trouble for those people. Very strange.

Second guy from the right in the top row looks like Nati's brother Ro'i in Srugim.

Another one even looks a bit like me. Come to think it, I can't seem to remember where I was on the night of the assassination.

That lady looks like thousands of girls in New York wearing Sheitils...

That lady is the one who sat next to me on the bus last week and gave me nasty looks because my collarbone was showing!

And to think, she cavorts off in Dubai after that!

Many of you are missing the point. The media is camping outside of these peoples houses trying to figure out what happened. As the BBC reporter said to me, "theyr'e lives are in $h!t".a

Assuming that it was the Mossad who carried out the assassination, that the assassins did indeed use the passports reported by the Dubai authorities, and that these folks were not actually involved -

This would indicate that the Mossad hit up the Misrad HaPenim for valid olim passports to copy - which should be extremely disturbing to any oleh. Not only are these folks suffering from reporters at home for a few days, but they will be at risk of legal action and blacklisting when they next travel abroad.

This was rather sloppy if indeed pulled off by the Mossad.

Actually - they should have used the IDs of the foreign anarchists that violently demonstrate weekly in Naalin/Billin.

That would have made them interpol's problem instead of just ours :-)

(and such sweet revenge.)

Wouldn't this have been a great diversion tactic by any foreign intelligence agency? Not only would Israel get the blame, but Israeli intelligence would come out looking unprofessional!

And yes... it is possible for someone to oppose Hamas, and want to embarrass Israeli intelligence as well.

Again- as the anonymous commenter said- while you all joke, would any of you like to be in the shoes of these Brits whose lives have been ruined?