Haaretz has the exclusive story about an "informant", Mosab Hassan Yousef -- the son of the founder of Hamas, Sheikh Hassan Yousef.(You can find more on Fox News). 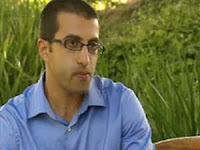 Known as "The Green Prince," Mosab Yousef was perhaps the most valuable intelligence asset of Israel's "Shabak" security forces, as he infiltrated the upper echelons of Hamas and the Palestinian terrorist organizations -- he was responsible for literally savings the lives of countless Israelis.
And he didn't do it for money. He converted to Christianity, and out of a deep moral conviction, he believed that helping Israel was the correct thing to do. (He could probably teach Goldstone a thing or two).
Read the entire article -- just the paragraph alone will give you a feel for this guy:

"I wish I were in Gaza now," Yousef said by phone from California, "I would put on an army uniform and join Israel's special forces in order to liberate Gilad Shalit. If I were there, I could help. We wasted so many years with investigations and arrests to capture the very terrorists that they now want to release in return for Shalit. That must not be done."

Truly a Prince...acting with moral conviction amidst a sea of terrorist swine.

An interesting juxtaposition is that about 10 years ago Haaretz reporter Gidon Levy interviewed Ehud Barak:

Haaretz journalist Gideon Levy had asked him [Ehud Barak] then, as a candidate for prime minister, what he would do had he been born Palestinian and Barak replied frankly: "I would join a terror organization." (Haaretz)

This week I spoke with my students about the Gaza war, in the context of a class on national security. One student, who had expressed rather conservative, accepted opinions - that is opinions tending slightly to the right - succeeded in surprising me. Without any provocation on my part, he opened his heart and confessed: "If I were a young Palestinian," he said, "I'd fight the Jews fiercely, even by means of terror. Anyone who says anything different is telling you lies." (Haaretz)

Makes you wonder how a Gazan-born Muslim, son of the founder and leader of a fundamentalist terror organization managed to orient his moral compass towards helping Israel, yet Ehud Barak and other Israelis are sure that in the same situation, they would have joined a terror organization.

I guess that explains how the Expulsion from Gush Katif happened. When one lacks a moral compass, everything can be rationalized for the sake of "security."

I guess this Green Prince would be the equivalent of a Palestinian Radical Leftist - someone who stands up against all the basic core values of his own society.

I wish our Leftists were as Zionistic as this man is.

But how long until his own people kill him, and the radical leftists violently protest against him?

Obviously he felt that Islam is problem for advocating of loathsome terrorist values. So he converted to something he felt has values of compassion. Why would it be hard to understand him for sticking up for Israel? It follows logically.

I saw a Fox News special about him, including many interviews with the "green prince".

Apparently, he was hardline Hamas throughout his childhood. He fought the Israelis during the first intifada, and was president of an Islamic youth movement that radicalized Palestinians.

He claims that because of his relation to his father in the "political wing", he was never brought in on terror missions. Asked at one point if he thought he had blood on his hands, if he had convinced others to commit terror attacked, he replied "I definitely have no direct blood on my hands, indirectly... probably".

After the Israelis arrested him in 1996, he was in a prison with his Uncle, and saw how paranoid and violent an organization Hamas was. They would watch each other like hawks and keep tallies on "odd behaviour" such as taking an extra 5 minutes to shower. Enough "points" and you were branded a collaborator and would be tortured or killed. This disillusioned him greatly (and apparently was around the time Shin Bet acquired him as an asset).

His conversion to christianity happened one day in Jerusalem where a Christian invited him to a bible reading and he heard for the first time the Christian saying "Love your enemy". This was so profound and beautiful to him that it opened his mind and convinced him to seriously compare the Koran & the Bible, and he concluded that Islam is a bipolar religion and cannot be the true word of god.

Reminds me of the grandchildren of Nazis, and I think Haman's grandchild (the one that came out of the evening with his wife, after eating the kosher food at Esther HaMalka's feast).

Unfortunately, we can understand why E Barak does some of the things that repulse most Israelis.

he was hardline Hamas throughout his childhood. He fought the Israelis during the first intifada, and was president of an Islamic youth movement that radicalized Palestinians.

So he converted to something he felt has values of compassion. Why would it be hard to understand him for sticking up for Israel? It follows logically.

Thanks for sharing your story and confirming my suspicion. The means of faking passport and leaving innocent people whose passport get faked does not justify the ends. I would support a direct Entebee type of operation with Israeli military commanders rescuing hostages over this shady and questionable operation conducted by who knows.