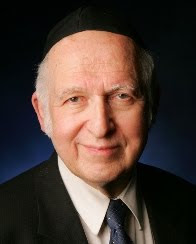 Update: Entire Hebrew transcript of R' Aharon's lecture: here Having read through it, I highly suggest you take the time to read it as well (if your Hebrew is up to par). R' Aharon painfully recounts the details of this breaking story, and how we arrived at the current situation. Worth reading. --Jameel

YNET (translated from the Hebrew), rotter and ynetnews report:

In an emotional lecture to his students, often breaking into tears, R' Aharon Lichtenstein announced that he has received death threats by a student of R' Motti Elon in retaliation for his participating in the Takana forum which labeled R' Motti as a "dangerous person."

In response to allegations of of the harsh treatment towards R' Motti, R' Lichtenstein said: "[R' Motti was Blackmailed?] Blackmail? What Blackmail? Who received any benefit from this [Takana report]? [It only caused us] only severe pain and suffering"

"The incidents accumulated, but the outcry isn't over that. We would not have gone with that to the media. The issue was to the point -- and people were being hurt. There were people whose families were seriously hurt. People were suffering mental anguish. The dam started to leak in terms of the confidentiality surrounding the issue -- when information started leaking to the media. There was a sword hanging over our heads, when would the news leak out."

We made the decision to publicize the events a week ago. The Takana forum warned R' Elon, and then another abuse was brought to the attention of the Takana forum, which was defined as "extremely serious."

"Everything was done with a heavy heart, believe me, I know what a blow this is to him and his family; his wife is broken and exhausted, yet we had to do it [publicize the warning"].

In related news -- the JPost covers more of this agonizing story:

Rabbi Yuval Sherlo, head of the Petah Tikva Hesder Yeshiva and a member of the rabbinical forum that works to prevent sexual harassment in the national-religious sector, said on Wednesday that Rabbi Mordechai (Motti) Elon's actions were "far worse than sexual harassment."

Elon admitted to the acts in a meeting with Takana Forum members, Sherlo told Army Radio, adding that the rabbi's confession is documented in the forum's protocol.

Sherlo went on to stress that even if what happened between the rabbi and his students was consensual, it was wrong for Elon to exploit his "spiritual authority" for this purpose.

Since the accusations against Rabbi Elon were made public, Sherlo said, 10 other students of the rabbi had filed complaints against him to the forum.

Elon has denied all of the allegations against him and said they derived from one “seriously disturbed” student, adding that the charges constituted “a blood libel, but I am happy that the truth is beginning to emerge."

However, Takana Chairman Yehudit Shilat told The Jerusalem Post on Wednesday that reports claiming the allegations against Elon were solely the result of a single disgruntled student or someone with a personal vendetta against the rabbi were “absolutely false.”

Shilat, who said she hadn’t slept over the past 55 hours, would not comment on the number of complaints and the severity of them, saying the organization still needed more time to determine how many of them have any basis.

According to a statement posted on Takana’s Web site Wednesday, the group was reluctant to publicize the matter in order to “protect the complainants.”

Klal doesn't have to worry about it's enemies from without--we have enough homegrown ones of our own. Someone issues a death threat to R'Aharon? And this is normal how?

i was there he said shita- blackmail not shechita slaghtering

anonymous: Can you vouch for everything else reported? Anything else to add?

Also - did R' Aharon say if the letter was from a talmid or a relative? There were conflicting reports in the media.

FYI: blackmail is "sechita" סחיטה --
is that the word he used? It would make more sense contextually than "shechita" as reported....

After all the expose in America, this scourge is coming to light in Israel.

It is halacha to warn the people about abusers; SOME 'righteous' Rabbis (stand up for emes and) say to go to the police with the info, but I don't know if the police in Israel are equipped to handle these matters. Maybe the internal committee of Takana is the most appropriate forum.

I once wrote about this as being a revisit of the same issue from very early in our creation on earth, only know as with the laws of the Rambam, one must resist and turn away in order to rectify the sin (IMO that comes from the yetzer).

The 'sanity' of the one who threatened needs to be examined. Abuse is abuse is abuse. So sad.

I read that R. Lichtenstein clarified that it was not a death threat but some kind of legal threat.

Yameel, those chinese/japanese markings are not tznius, just run them thru Google Translate!

My impression is that Rav Sherlo did not personally hear any 'admission' from Rav Motti but referred to the minutes of the meetings.

In any case, what has occured is that the Takana Forum more readily believes Rav Motti less than any one else. That's a value judgment call, not a decision.

I read that R. Lichtensteing was a very good person that made great things for him country, when he went to israel he said that his dream was fight against the injustice.