USA taxdollars are now financing an ad campaign in Israel featuring huge billboards of Palestinian terrorists asking you to "accept" their "partnership" with Israel. 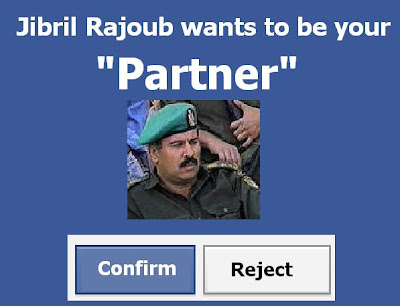 I saw a bunch of these in Kfar Saba last night, and found the corresponding UPI article:

The aim of the campaign is to persuade Israelis that peace partners on the Palestinian side truly exist, and calls for support of a two-state solution, the Tel Aviv newspaper said.

The U.S. government was approached to fund the campaign by the Geneva Initiative founders, who drew up an agreement in 2003 to end the Israeli-Palestinian conflict, the newspaper said.

The U.S. Agency for International Development, or USAID, invested close to $250,000 toward the creation of the billboards, the newspaper said.

The campaign has raised a few eyebrows in Israel.

"We are talking about a Palestinian Authority campaign funded by the American government," an Israeli Foreign Ministry official was quoted saying."

The following is a much better representation of the "Geneva Initiative" 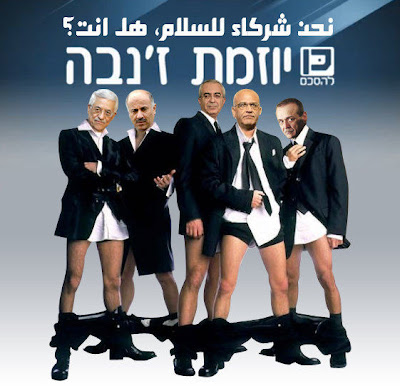 All kidding aside (though this is far from a laughing matter), PMW found the following video for us, which was paid for by the Palestinian Authority.

The following is a transcript and description of the performance:

"Fight, brother, the flag will never be lowered,
the torches will never die out."
On [Mt.] Carmel (in Israel) and in the [Jordan] Valley,
we are rocks and streams.
In Lod (Israeli city) we are poems, and in Ramle (Israeli city) - grenades.
We, my brother, shall remain the revolution of the fighting nation."

Vocalist sings:
"The Zionists went out from [their] homelands,
compounding damage and enmity.
But the Palestinian revolution awaits [them].
The orchard called us to the [armed] struggle.
We replaced bracelets with weapons.
We attacked the despicable [Zionists].
This invading enemy is on the battlefield.
This is the day of consolation of Jihad.
Pull the trigger.
We shall redeem Jerusalem, Nablus and the country."
[PA TV (Fatah), Sept. 12, 2010]

Or watch it here:

The US is spending hundreds of thousands of dollars trying to convince Israelis to give away their homeland and security to this "partner."

Maybe this money would be better invested in the USA's economy?

Is "Pull the Trigger" the Palestinian version of Tipex's "Push the Button"?
:)

Yoni: I was thinking that...but "pull the trigger" is a serious song...

They feel so humiliated by what the Jews have done that all they feel is rage, resentment and defiance.

Not exactly the kind of qualities one seeks in a "peace partner."

Perhaps they should "pull the trigger" on themselves. It might relieve their eternal angst over not being able to compete with Israel.