Israel's Channel Two News just reported that a THIRD Israeli has been kidnapped by Palestinian Terrorists -- a 62 year old man from Rishon L'Zion, according to a statement released by the Fatah terror group.

The IDF is attempting to verify the claim.

I was going to just put up these pictures by themselves, but decided to combine them with this newsflash. 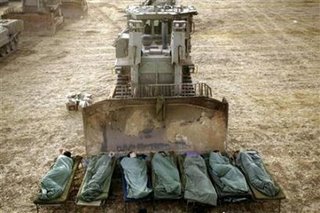 IDF soldiers sleeping in the shade of an armored D9 Bulldozer

One of 3 Gaza bridges targted by IAF jets 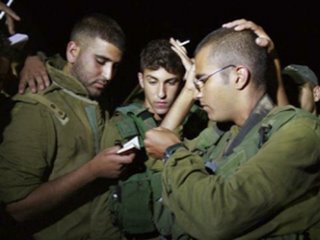 IDF soldiers in prayer prior to entry into Gaza. 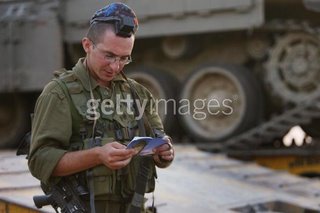 I would imagine that the third image, which I have also linked to, is the most telling one regarding the emtional roalercoaster Israelis are riding today.

How powerful these images are.

I know in London, we are all davening for Gilad ben Aviva.

Damn you Jameel...as if I wasn't thinking about this constantly, you had to put up those pictures.

Now how am I going to stop crying!

In case someone isn't Jewish/knowledgeable about Judaism...they are covering their heads because they don't have a kipa/yamulke/headcoving on while praying.

the pictures really hit home. glad you posted them and i wish you didn't have to.
may our soldiers be in and out of there swiftly and safely, and may our missing brethren be returned, unharmed.

"Body of Noah Moskovitch, 62, found in Rishon Lezion with no signs of violence; Fatah had claimed he was third hostage"