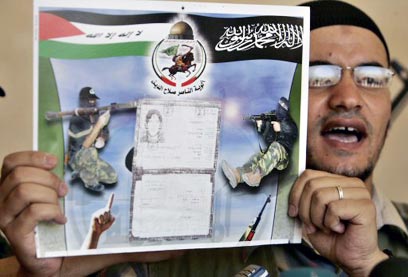 Photo from Reuters
YNETnews reports: The Popular Resistance Committees organization on Wednesday afternoon presented for the first time a picture of kidnapped settler Eliyahu Asheri's identity card. Asheri, a resident of Itamar, has been missing from his home since the weekend, and his family fears for his life.

The organization's spokesman, Abu Abir, gave reporters identifying details on Asheri, including his date of birth, his ID card number and his parents' name. He even gave the youth's middle name, Pinchas, which was not published on the Israeli media. 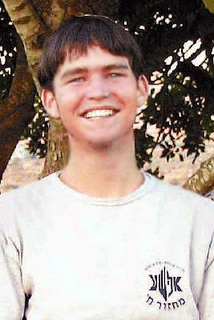 The Asheri family woke up Wednesday to another morning of fear. The mother Miriam spoke to reporters who arrived at the family's home, but found it difficult to speak for a long time and seemed very excited.

"We turn to those who are holding Eliyahu and ask them to watch over him and treat him well," she said, supported by her 14-year-old daughter Hayuta.

"We ask them to return him alive to us and call on the public to pray for his wellbeing. He had not done anything wrong and there is no reason why they should do him wrong. We also want to say thank you very much to the security forces, the army and the Shin Bet who have been exerting all efforts. We really trust them and appreciate their work," Miriam Asheri added.

Turning to her son, she said: "Eliyahu, if you can hear us, give us a sign of life. Tell us what your condition is, so that we can know how you are mentally and physically."

One has to wonder if these terrorists and their supporters have completely lost their "tzelem enosh", their membership in the human race.

It's sad but noteworthy that Hamas was elected by the Palestinian people in a popular vote election. Where are the Palestinians who condemn this sort of behavior? Why aren't they decrying this inhuman torture?

This American Moslem blogger is someone we can talk with.

Unfortunatelyly, I don't see any Palestinian bloggers out there decrying these kidnappings.

Where is the reciprocal support from moderate Arab bloggers around the world who condemn these actions -- Jewish and Israeli bloggers went to bat for the imprisoned Egyptian blogger, Alla, yet Arab bloggers remain silent during these atrocities?

Go ahead and prove me wrong.

Here are some more Arab bloggers who have expressed their disapproval:

And someone asked the Palestinian Princess about the Asheri kidnap in her comments box on her latest post
http://www.palestinianprincess.blogspot.com/

(Weary Disclaimer: I'm not aligning myself with any of these viewpoints. Jameel just asked for links and I'm providing some)

pp: You know, I was actually excited by the prospect of reading something refreshing on these 3 blogs.

The people who did this, brave as they maybe, did not stop to think of the repercussions this will bring to the people of Gaza. I was horrified to see the bridges and power station hit, and responsibility clearly lies with the Israelis, but those geniuses in Hamas could clearly foresee a harsh reaction that spread the suffering upon the civilian population, as if they needed any more.

This isn't exactly the same condemnation and empathy as seen by Israeli and Jewish bloggers defending the Egpytian blogger...is it?

No, and you aren't going to find the same type of condemnation nor empathy: It is a pride issue. This (Jewish) blogger sums that issue up very well...

I am not sure why you are so surprised. The terrorists and their supporters lost their "tzelem enosh" a long time ago, or rather they were born without one to begin with. See http://agmk.blogspot.com/2006/06/to-condemn-or-not-to-condemn.html as Desertpundit is concerned.ag

I am not surprised either this is nothing new.

Besides Tennenbaum (...perhaps we'll never know the whole story on that one) can anyone recall a live Israeli exchanged for Palestinians in recent years ?
In any event, we're praying that they return home safe and sound to their families soon and this nightmare will be over.

hey everyone, i love this blog!!!

The problem is not that the Arabs have no tzelem enosh, but they have convinced themselves and their fellow Arabs that we don't have one.

I tend to think that R. Kahane was correct: the only way to "win" is to throw them all out--from within the Green Line, from without it, from Gaza, from the West Bank. The only problem is that that it would then give the the other nations of the worlds the excuse they are looking for to turn around and wipe Israel off the map.

The only other possibility is when the Arabs wake up--but given the last century, I'm not holding my breath for that.

Jameel,You will wait and wait and wait.Hopefully the IDF will follow what Debka sugests and takes care of business.Enough waiting.

now if this stupid governemnt would start following halachah, especially those concerning defending border towns, i can assure you that many lives would be saved.

Jameel- read the Bog Pharoah again, he has a post about Muslims denouncing terrorism.