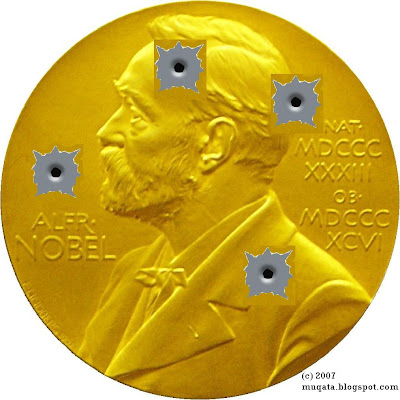 If this doesn't bring in multi-national troops to Gaza, I don't know what will.

"They stole almost everything inside the house, including Arafat's Nobel Peace Prize medal," said Ramallah-based Fatah spokesman Ahmed Abdel Rahman. "Hamas militiamen and gangsters blew up the main entrance to the house before storming it. They stole many of Arafat's documents and files, gifts he had received from world leaders and even his military outfits."

Abdel Rahman said the attackers also raided the second floor of the house and stole the personal belongings of his widow, Suha, and daughter, Zahwa. "They stole all the widow's clothes and shoes," he added. "They also took Arafat's pictures with his daughter." 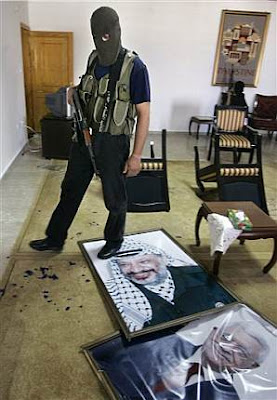 I think we should start an on-line petition to give the Palestinian people, Shimon Peres' Noble Peace Prize as a replacement.

I already saw them offered on ebay.

Thats some pretty crappy photoshop there you did with the bullet holes :)

It's not like the Hamasniks are any less worthy of it.

I just love how the Hamasnicks pose for photos.