I received the following in the mail with a significant comment that someone attached to it.

At first glance this is very important flyer and protest. But now, take a second and think why this goes beyond insulting. 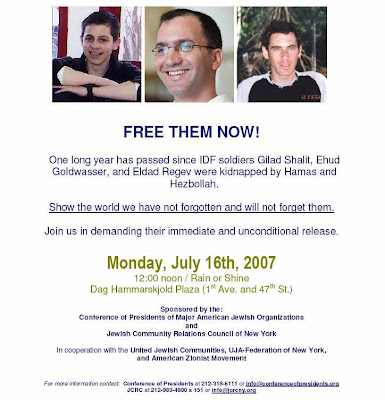 If you didn’t catch it, then let me explain.

Off hand, I can think of 5 other kidnapped Israeli soldiers that appear to have been forgotten by the organizers.

So what does this mean?

We only won’t forget the last batch? The others are less important? Less interesting? When Hamas or Hizbollah kidnap the next soldiers, do these current guys get forgotten for who ever is newer and more “in”? Do we not care about the rest anymore?

Did we simply forget them?

I'm sure they had good intentions, but it’s a shame when the leadership of such large (I don’t know if they are important) organizations screw up so seriously.

You can voice your displeasure to them at: info@conferenceofpresidents.org and info@jcrcny.org

(Oh, and what about Jonathan Pollard?)
Posted by JoeSettler

Here's a link to a list of the other five and their hebrew names for tefillah.

I think it does a disservice to captured soldiers to lump Jonathan Pollard together with them.

I agree wirh ezzie. You ask "what about Jonothan Pollard?" What do you mean? He is an admitted traitor serving time in jail for his crime. It is offensive to lump him together with the missing chayalim. We know where he is, he recieves medical attention, visits from family, rabaaim, and others. You feel like Israel somehow abandoned him. Fine, maybe it somehow did. You think his sentence is disproportiante to other traitors. Fine, maybe it is. Feel free to complain or even protest. But that in no way makes his situation at all equivalent or comprable to those of the missing chayalim and it demeans the cause of the missing chayalim to pretend it does. The prayer for the missing chayalim put out by the National Council of Young Israel includes Pollard and refers to him as being held in the hands of our enemies ("b'yidai oyvainu"). How disgusting and repulsive. I am happy to say that the Young Israel I attend does not include his name in the tfillah we say every shabbat and yom tov for the missing chayalim.

For those of us in Israel, we deplore and denounce the unfair and disproportinate punishment he is receiving compared to other spies (and traitors) who received the equivalent to slaps on the wrist compared to Pollard - and for activities that appear to be far, far worse - including the deaths of US spies.

For many of us in Israel, Pollard is a hero, not a traitor. He is a soldier and agent of the Israeli government.

And we view his continued imprisonment at the hands of the US government as either a political message to Israel or a blatantly anti-Semitic warning to American Jews.

But regardless, the focus on this post was still the rest of our kidnapped soldiers, and how they've obviously been forgotten.

Joe: Since we all agree that our primary focus, and intent should be the saftey and welfare of the missing chayalim and that they be kept upfront in out thoughts, I lead with our agreement. As to Pollard, I cannot disagree with the Israeli perspective. My beef is with American Jews, who take offense at the implication of dual loyalty, but then treat Pollard as some kind of Hreo. In America, he is no hero. He is a criminal. Maybe an unfairly poorly treated criminal, but no hero. He is a traitor to America and has addmitted so in Court. For an American (or certainly an American organization) to say he is being held by our "enemies" is downright offensive. I think he should be let out of jail, I have even attended protests on the issue, my qualm is with the status to which he has been elevated by some in the American Jewish community. Traitor or not, I hope that he will be united with his family soon, and pray that the missing chayalim will be reunited with their families soon, and in as good health as possible.

Pollard is no traitor. If he had in fact committed treason against the US -- or if the government even had any grounds for thinking so -- do you have any doubt that he would have been charged precisely with that?

The government didn't charge him with treason, because they knew he didn't betray the US. Don't slander the man by tossing around the term "traitor".

Anonymous: This is the kind of back and forth I want to avoid -- but I can't help myself. Pollard was a member of the United States defense establishment and he pled guilty to one count of espionage. Stealing U.S. defense secrets and passing them to a foreign nation. In my book, that makes him a traitor to the United states of America. That is not slander. You disagree, fine; but to accuse me of slander by calling a convicted spy a traitor is really a bit much. I feel guilty keeping this going concerning a post dealing with the missing chayalim, whose safe return should be a top priority for all of klal Yisrael, so I am stopping now. So anyone who replies to what I have said (which would only be fair since I posted this) will get in the "last word" (with respect to comments to this post). A shabbat shalom to all.

I actually saw a copy of this poster in my office, hanging on the communal bulletin board--but someone had "stretched" it, and added a piece of paper with the names of ALL the missing soldiers.

FWIW: United States Constitution, Article III, Section 3: "Treason against the United States, shall consist only in levying War against them, or in adhering to their Enemies, giving them Aid and Comfort." [emphasis added]

If Israel is officially considered an Enemy of the United States, well, that's news to me.

Observer: Joe isn't speaking for all Israelsis when he puts forward that point of view. Most people here agree with you.