1. 2:04 PM. Schools in Kiryat Shmona have been instructed by the IDF to open their bomb shelters. Kibbutz Avivim residents even were unofficially instructed to enter theirs based on intelligence reports of possible upcoming rocket attacks.

2. The Gay Parade is approaching in Jerusalem. Watch out for traffic jams, police violence, demonstrator violence, police motorcycles that smash everything in their way, police water canons that have destroyed homes (even homes that had nothing to do with the demonstrations)

3. The other evening was a mega cool "Occultation" (eclipse/alignment) of Venus by the moon, which was very visible here in Israel. I called my kids to make sure they looked up at the sky to see it, since it was definitely bracha-worthy. The best pics I found are these: (the bright, star-like object is Venus) 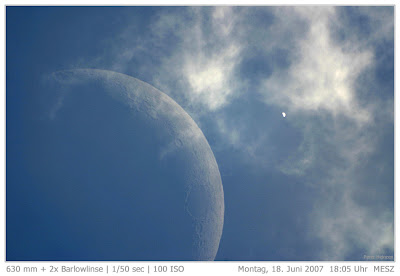 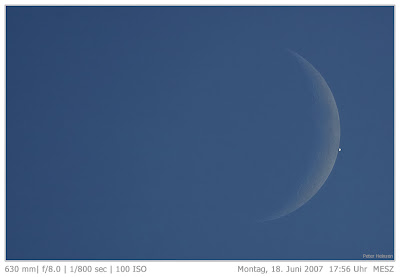 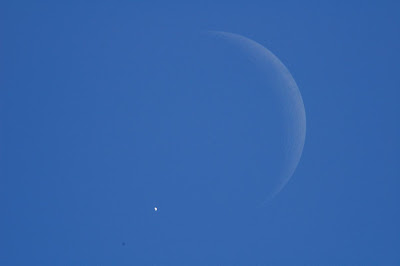 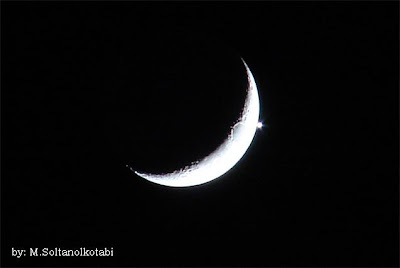 4. Fatah asks for more weapons. US and Israel think its a grand idea. Hamas anticipates "inheriting them soon".

A senior Hamas terrorist told WorldNetDaily that Hamas is encouraged by the funding and arming of Fatah in Judea and Samaria – as the Islamist group is certain it will inherit those weapons and funds just as it did when it took over Gaza. "Like the American weapons in Gaza we told you would come to Hamas, also the weapons and aid the Americans are giving to Abu Mazen (Abbas) as part of their conspiracy against us in the West Bank will find its way to the Palestinian resistance and Hamas," Hamas’s Abu Abdullah said. He would not say whether Hamas was planning to take over Judea and Samaria from Fatah in the near future, but said he “hopes” that the US continues to provide large quantities of weaponry to Fatah so Hamas can inherit them. Hamas is currently “swimming” in American weapons seized last week from Fatah facilities, according to Abdullah. A7

Giving Fatah weapons is in line with our new president's well thought-out philosophy:
"Guns don't kill, people do."
That's a quote you didn't have on your Peres-quotes blog.

Wait, I thought that they already had Israeli pride day? Wasn't it in October?

First time wasnt a parade but a "get together" in the HU sports stadium...

Yep, that sounds about right. It's a little early in the summer for a way, but hey, it's still summer.
-OC

Dear jameel,
Shalom, boker tov. I do not know if you read my response earlier...with regard to aliyah.
I am only able to write to you via the public library...we have no internet in our home. Will you please write to me, snail mail? I left my address earlier: the "ostracized" one. Here it is again:
Yeshayahu ben Avraham Galluzzo
Brenda bat Andrea Galluzzo
988 Duvall Hwy
Pasadena, MD 21122

Please write to me soon, and the address you leave me to mail to you will be seen only by my wife and I. I hope to hear of your ideas soon.
Respectfully yours
With love and prayer, l'shanna haba'ah birushalayim
Yesha Galluzzo

I saw that there was a planet very close to the moon the other night after (or before?) arvit but I didn't know what it was. Thanks for the info!