Following is a newspaper article (don't know from HaModia or Yated Neeman)...summary follows... 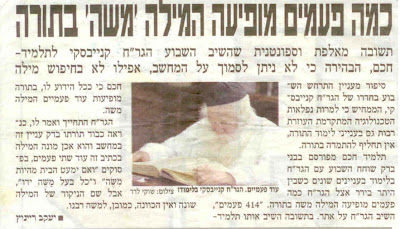 How Many Times Does it say "Moshe" in the Torah?

Rav Chaim Kanievsky [son of the reknown "Steipler" Rav] tells student: Computer can't be trusted for anything, not even on a simple word search.

A Torah scholar approached R' Chaim and asked him how many times the word "Moshe" appears in the Torah. On the spot, R' Chaim (known to be an amazing Torah Scholar with a phenomenal memory) replied, 414 times. His student replied that to the best of his knowledge, the word Moshe appears 2 additional times.

R' Chaim smiled and replied that his student must have checked via a computer, and the 2 additional times his student was thinking of, were instances where the word was spelled the same way as "Moshe" but had different nikud (punctuation) [thereby a computer would have grouped them all together for a total of 416 instead of 414].

The green highlighted sub-heading claims that R' Chaim said, "Computer can't be trusted for anything, not even on a simple word search" R' Chaim never said anything of the sort.

This article can be read in many ways, depending on your hashkafa:

Computers are a stupid waste of time; can't rely on them for anything (assumes: Chadash Assur Min HaTorah -- anything new is forbidden)

Computers can be of great value, need to tweak them to ensure they do proper word searches with Nikud/punctuation (ie, Bar Ilan University researcher)

R' Chaim Kanievsky is smarter than a computer (Artscroll Hashkafa)

R' Chaim Kanievsky is one of the greatest Torah Scholars of our time with an outstanding memory. Newspaper sub-headlines that imply that computers are stupid and can't be relied upon for word searches, are written by idiotic editors. (my thoughts)

Computers are only as good as they are programmed to be.

I agree with your thoughts. :)

You finished writing the Bar Mitzvah speech? Glad to hear that! Please forward it to me...

I always wonder about the background to these kind of stories. Was the other Rabbi trying to stump him? Why would one Rabbi go over to one of the Gedolei HaDor and ask him how many times Moshe was written if he already checked it and (thought he) knew the answer?

I'm with you, Jameel.

These types of articles are always amazing in their level of ignorance and egotism. And while they often fly fine for children, I consider that they often cause damage to the yiddishkeit of thinking adults.

Lets see, the article is typeset, written on a computer, layed out on a computer, and (I'm willing to bet) electronically transmitted to the printing house.

I'm doubtful a gaon would make such a statement, and if so it has a context which has not been fully provided.

If he wishes to imply that computers don't make judgements, he's right, they don't. They make thousands of preset decisions according to exact preset elements, and are only as good as that preset pattern happens to match the circumstances that come against it.

My hashkafa is that the anti-thinking mindset that has invaded the charedi cultural mindset in Israel is a shanda, and an amazing turn around of previous generations. Since when don't Jews challenge??? Isn't that what the whole Gemora is? No where in the Gemora have I read it say "since Rabbi Akiva said it, and he's the gaon, we may not argue."

I strongly suspect this is out of context, and a rebuke on the student saying, 'you can't rely on a computer for YOUR Torah knowledge.'

I'll go with opinions 2 and 4...as they are both correct.

Jameel - Are there any publications in Israel that are not either Chareidi or virulently anti-religious? Does the Bnei Akiva crowd have any of its own print media?

BTW, R' Yitzchak Ginsburgh (galeinai.net) is also known for similar type of brilliance. He once gave a shiur on mesechet Sanhedrin where he mentioned btw how many times a certain obscure tanna (I think R' Acha brei d'rav Ikka) appears in the masechet and in shas.

There's a well known mnemonic (sp?) from the GR"A that in Maseches Sukka there are 91 instances listed of kosher sukkas (gematria of sukka with a vav) and 85 listed instances of passul sukkas (sukka without a vav).

...the word was spelled the same way as "Moshe" but had different nikud (punctuation) ...

Nikud is not the same as punctuation. Vowelization or voicing would be a better translation.

Other minor kvetch.... vowel-points aren't used in a Torah, though they are used in a chumash.

And add that Rav Chaim Kanievsky is without doubt much smarter than the idiotic editor who wrote the subheadline.

Well, any frum person working on computers, could at any one time, depending on their computer-abilities, say any of the above statements.

Haven't you ever gotten frustrated at a screen that freezes just before you "saved" that article? (stupid computer!)

Haven't you ever "found" something of extreme value to your intellectual "searching" that gave you much nachas?

Ok, all jokes aside, of course there is no comparison with a REAL Gadol of stature. There is the practical and there is the sacred.

You finished writing the Bar Mitzvah speech? Glad to hear that! Please forward it to me...

Hey now, why don't you let me take a crack at this and save you some time.

We'll start with a tribute to waffles and wander into the finer points of syrup in a squeeze bottle.

Raggedymom, yes there are many newspapers that arent Charedei or anti-Torah. Try B'sheva and Makor Rishon to start.

I think that first commentor got it right: computers are only as good as their program. And some things are better done by humans, anyway... Does a computer read Torah for the love of it?

Thanks for the info

sorry to tell you all that this story is very distorted, 414 times, and today came out in Yated front page with an other number 614 times appears Moshe in the Torah and my computer (with nikud bar ilan program)tells me that it appears 592 times and in dbs program search that the Megale amukoth explains why Moshe appears 592 times!!!

Why did this Talmid Chochom ask Rav Kanievsky a question he believed he knew the answer to?

While on the subject of computers...

Alan Cooper, the man behind Visual Basic, said in his book "The Inmates Are Running the Asylum" that computers are, in fact, stupid (his word), and that the blame for problems with human-computer interaction lies directly with the programmer.