This Meah Shearim guy probbaly had no clue what he was dressing his kids as... 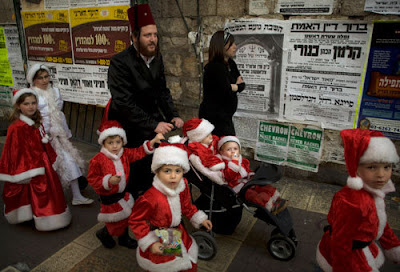 Its not easy being gray in the Orthodox world. Another Eli Clark Classic. 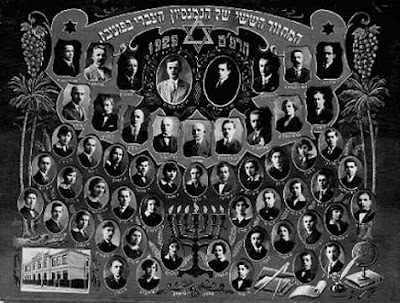 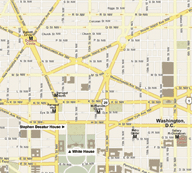 Missing in action: There’s no J Street on pro-Israel map of D.C. Some say it’s on the far left side of town.

After almost two years of existence, J Street, a left-wing political peace movement, still cannot be found on any pro-Israel map of Washington, D.C. Google maps and GPS are equally unable to identify the controversial lobby. “I’m sorry I don’t think there is a J street in D.C.,” said a confused Zionist tourist checking his map again. “Did you say it was pro-Israel? Nope, I got nothing here.”Map officials say that J Street can be found on pro-Palestinian maps of Washington, though.“If you open a detailed map and look all the way to the left you’re sure to find it,” asserted Lawson Found, chair of Charting Your Course Maps of D.C. (more here).

I used to live in Washington. I was stunned when the J Street group took that as their name, because everyone in Washington knows that there is no J Street!

I do feel sorry for the people of Gaza who have to put up with Hamas thuggery, and I am also embarrassed by the scandal-a-week that comes out of the Orthodox community. But that doesn't mean I support J Street.

That's one thing I love about being a conservative: I don't always have to apologize for anti-Semitism and anti-Zionism of "my side" the way Charlie does. :-)

NCIS the tv show had a little quip about the lack of J street in D.C.

Said the reason was because back then, J and I looked too similar and people would get confused as to which street they were on. (this led them to realize the murder was on the wrong street, and the guy who was "supposed" to be killed, was one street over :P )