Updated with Jameel and Jameel's daughter.
(updates will be throughout the post. Pictures from the farm will be inserted soon).

Jameel saw the Yassam troops gathering there this morning, closing off roads. Jameel's daughter is SMSing us with updates. 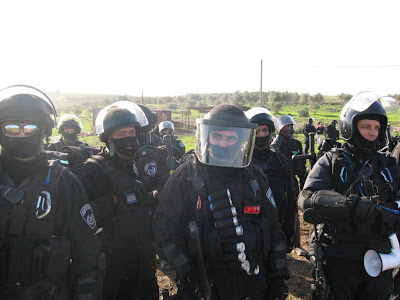 3 structures destroyed so far on this Jewish-owned private land owned by Moshe Zar.

Police shot Jewish civilians in the back with rubber bullets as they were running away, after police told them "you better start running".

Video of policeman pulling the trigger on a woman from a few feet away. Walla
75 year old woman and children among the injured.

Police shot civilians at point blank range, many in the back. 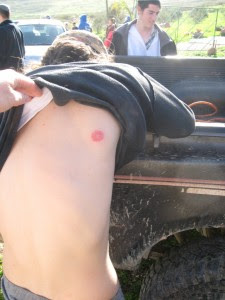 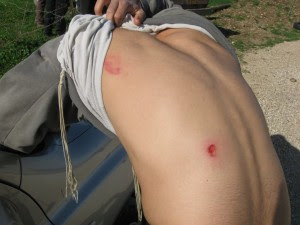 Pictures: KolYehudi
Moshe Zar's son Etai is among the wounded who was shot.

MK Michael Ben-Ari (Ichud Leumi) was attacked by policemen and knocked down.

The community is named in memory of Gilad Zar who was the security officer for the Shomron Regional Council and was murdered by Palestinian terrorists in that area.


In the past few weeks there have been a number of reports of police cocking their weapons and pointing them at Jewish civilians in the Shomron.

Sounds like they're no better than the Libyan forces. How could they??

Someone had better be forced to resign because of this.

Those who try to murder Jews are war criminals. They need to be held accountable.

And the public must force the resignation of the police chief and changes must made to ensure the police never fire on Jews again!

What a disgrace to the State Of Israel those Yassam goons are!

How can you not compare this to the Jewish ''police'' in the Nazi ghettos? What kind of a gov't. do we have that fights Jews & protects Arabs?

Context please? If the people being shot were Palestinians you wouldn't bat an eye.

Shot in the back... shot lying down... real threats they were... police and government should be ashamed... tell me where the protest will be... I'm going.

What kind of country has Israel become where the police assault an MK? They would never do it to Arab MKs but they did it to a Jew.

There's a reason Israel's kapos use Bedouin and Druze Border Police for their dirty work: no Jew would fire on a fellow Jew.

This is what we get in the Jewish State. The government beating, assaulting and shooting its own citizens while demolishing their homes. Such a government neither deserves their consent or their obedience. Only their resistance and their resistance to its illegal acts will grow and endure.

"There's a reason Israel's kapos use Bedouin and Druze Border Police for their dirty work: no Jew would fire on a fellow Jew"

Yes but Israelis of the "i'm not Jewish I'm Israeli" variety would have no problem.

If the people being shot were Palestinians you wouldn't bat an eye.

Stranger in a strange land.

The police action is wrong on so many levels. "They" treat the palis with kid gloves because they know their murderous intentions yet they crush their own kin & people with totalitarian extremism. Why???

Why does this un-appreciative, non-existent, self-proclaimed minority have so much more rights and protection than the birthright people who love and care for the land?

Is this some kind of parody I'm just not getting? The comments here are bizzare.

This sort of thing happens in every country in the world all the time. Recently in London over the tuition fees. You never went paintballing?

This wasn't paintball it was rubber bullets

Bibi should be asked a question or two.

It was worse than paintball and worse than rubber bullets. It was the FN http://www.fnherstal.com/index.php?id=368&backPID=255&productID=90&pid_product=254&pidList=255&categorySelector=3&detail=&cHash=27ecec5828