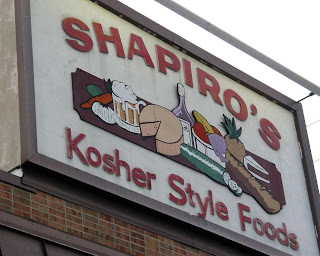 She expounded on her vast knowledge of Judaism, when she declared:

I think she meant, "Jewish Style" values. Sort of like "Kosher Style".

For food to be considered "Kosher" it needs to meet the many standards of complex Jewish laws, which are based on laws and traditions thousands of years old.

For those who don't want to bother with preparing and eating food that's actually Kosher, there's also "Kosher Style" -- which is usually food that isn't Kosher at all, but satisfies one's cultural conscience, that the food they are eating is somehow connected to something Jewish.

A two-state solution isn't any more of a Jewish value, than a cheese hamburger is Glatt Kosher.

You can argue in favor of a two-state solution from many angles, but calling it a "Jewish value" is simply factually incorrect, and devoid of any historical, religious, or Biblical background. Calling a non-kosher deli sandwich "Kosher" doesn't magically make it Kosher.

As with "Kosher style", Livni's statements can be deceptive to Jews who are looking for Judaism.

And for the record, the JPOST didn't release this story in a vacuum. It was provided as a Kadima PR service, "Brought to you by the United States Embassy, Tel Aviv, Public Affairs Office" (see bottom of the JPost article)


Note: I have no idea if the above pictured "Shapiro's Kosher Style" eatery is Kosher or not. I would guess it's not.

If its not prepared in accordance with Jewish law, its not kosher.

As for Livni's statement, there are many arguments one can make for a two state solution but to assert Jewish values mandate it is simply dishonest.

There is no rule anywhere in the Torah I've aware of that commands the Jews to share their sovereignty with other peoples in the Land. I was always under the impression it was a Jewish birthright.

Then again, when is the last time Livni read the Torah? My guess is she's as familiar with it as with people who think kosher style food is authentic Jewish cuisine.