One of the aftermaths of the Holocaust was that overt Antisemitism became officially frowned upon in many countries, and over time even became socially unacceptable in an overt manner in many circles.

But as memory of the Holocaust fades, Antisemitism, merely suppressed and not eradicated, has come back out of the closet in full force.

Today, Antisemitism still wears a façade in order to make it socially acceptable, but I hardly expect that façade to be required for much longer.

The most common veneer we see used today is simply saying ‘Israel’ and ‘Zionist’ instead of ‘Jew’.

But there is also the type that hides behind the activities of many “rights” groups, such as human rights, animal rights, Palestinian rights, etc, recent examples include the BDS movement, and trying to ban circumcision and kosher slaughter (Shechitah).

Under the guise of ‘animal rights’, Holland just signaled their intent to ban kosher slaughter in their country (the JC article isn't 100% correct, see the end of the post). How much longer before they ban the import of kosher meat too?

Of course, Holland being an enlightened country will not outright ban kosher slaughter, instead they will ban any method of slaughter that does not first stun the animal, which as a known side-effect renders it unkosher. They allegedly did this out of concern for animal rights and suffering.

There are those that posit that this was done as a backlash against the growing Moslem community and that specifically Geert Wilder's PVV party was using this to attack the Moslems, using the tacit support of animal rights groups in Holland to get it passed.

It is clear enough that Geert Wilders is NOT Antisemitic (though he seems to me to be anti-Islam (but not anti-Moslem)), but I don't think he had good enough advisers that understood the difference (or cared) enough to differentiate between the slaughter methods.

Only this plan backfired (if it were true, because it is also clear that Wilders found himself stuck in a political mess created by these animal rights groups.).

Just as Hallal meat has no problem with short and non-straight knifes, which can be painful and ineffective (and cause other problems) in their slaughter method, it potentially can work with certain pre-stunning methods, though not all. So only Jewish Shechitah will be banned as a result, Not Moslem slaughter (Dhabihah).

Out of curiosity I decided to see how concerned the Dutch government really is when it comes to animal suffering and animal rights.

There are other activities that typically cause much far more pain and suffering to animals. And many people see it as simply cruel behavior.

If that activity were banned in the Netherlands, then at least they could make a case that this was about animal rights and not an agenda driven by hidden Antisemitism.

But as it turns out, the Dutch government doesn’t really care much about animal suffering at all. 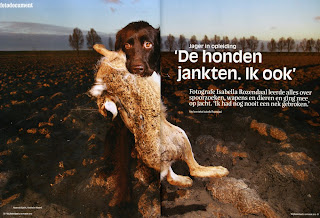 You see, hunting in Holland is legal, and it certainly does not require that you stun your prey before you shoot at it from 50 yards hoping to hit the poor animal.

So while there are approximately 45,000 Jews still living in the Netherlands, many of whom rely on the humane method of Kosher slaughter which may soon be illegal, we can compare that to some 30,000 Dutch citizens who have licenses to hunt and try to kill animals from a distance, for sport, without stunning them first and certainly with no minimal guarantees the animals won’t suffer from this.

That’s not hypocrisy. That’s overt Antisemitism.

Just to point out the obvious, the Holocaust began just a few short years after the Nazi party (and friends) began banning Kosher slaughter (Shechitah).


Meanwhile, the only light here is that certain items in the bill are not yet 100% clear - nor has the exact wording been publicized. The bill that passed today had one definite change. All slaughter will now require licensing and the applicant organization has the responsibility to prove that its method of slaughtering is humane.

This still leaves a window open for Kosher slaughter, which is done with the highest of standards.

Furthermore, this law still has to pass through another House where the animal rights nuts are less influential, and where (ironically) the Moslems have more influence on the main parties.

The only thing clear about all this is that there is a lot of Antisemitism driving these various activists groups and they are becoming more blatant about it every day.

I honestly doubt its antisemitism. It just doesnt make sense. Maybe they havent gotten to hunting yet, or are working on it as well, or thats a harder battle for them to win (imagine trying to ban hunting in the US).

It seems more like a misguided (would you rather be tased to death or beheaded?) approach to reducing cruelty, supported by Wilders as an attack on Islam, forgetting that it affects Jews also. How many Gentiles know how our slaughter works? Its easy to overlook.

I say we start a boycott of Dutch products ...

There is anti-Semitism in Holland, and it does inform the debate.

But this action reflects far more anti-immigrant sentiment, far more hatred of Moroccans and Turks, and far more xenophobia, than it does anti-Semitism.
Both Dhabihah and Shechita were characterized as "ritual slaughter", it was implied that there was a heathen sacrificial element to the practises, and both processes were described by many commenters as barbaric, primitive, mediaeval, cruel .......
The intent may not have been discriminatory. But the discourse certainly was. And the support that banning "rituele slacht" garnered among the politicians was far greater than it would have been if Muslims weren't an issue.

Plus, of course, there is the by now well-known tendency of the Dutch to weep over the victims and causes du jour.

Why non-Muslims should avoid halal food

It has nothing to do with animal rights, humane slaughter, and so forth.