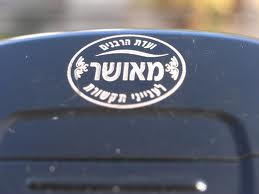 For those in Israel, "air raid siren" testing is part of our routine, and every few months there are siren tests to ensure everyone will be able to hear them in case of an emergency.

The IDF Homefront Command tested a new, additional system today; in the event of a critical emergency, urgent messages can be sent to entire geographic locations in Israel, by the IDF.

Of course, this presented a problem for the Chareidi population that only uses "Kosher" cellphones, which in addition to zero internet connectivity, these phones also blocks all SMS reception and sending.

Therefore, in conjunction with the "Board of Rabbis for Communications", the IDF is creating a "workaround" which allows for SMS messages to be sent even to those "Kosher" cellphones, which under normal circumstances do not receive any SMS messages.

In an interview with Kol Chai Radio today, Lt. Col. Gil Hoffman, head of "Computer, Networking, and Emergency Alert" division of the IDF's Homefront Command, said that about three hundred thousand "kosher" devices will be connected to the emergency broadcast service. "We're currently in an initial phase of the project. Only we [the IDF] are allowed to send these messages and security posts. It not only alerts for missiles, but also warnings against dangerous events, hazardous materials, fires, or urgent warnings from the Ministry of Health, for example, if residents Bene Brak would need boil their water prior to drinking it."