Naama Shafir is the first Orthodox girl/woman/female (yeah, you know who I did that for) to win an NCAA (basketball) scholarship.

That is one of two things that make her unusual. The second is that she is careful about Tzniut (modesty) and wears a t-shirt under her uniform.

This has never been a problem in Ohio or Israel where she is apparently considered a star player. 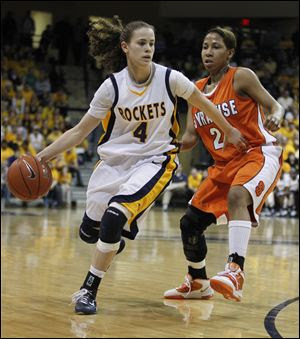 Naama Shafir on the field (she's the one in the t-shirt)
But that's not good in Poland where Naama's team is due to play.

European rules require that all team players dress exactly alike, and as such, Naama was disqualified from playing.

First of all, Naama: Great Kiddush Hashem on your part.

Second, who the hell wants to go to Poland anyway. They're still just a bunch of anti-Semites there.

source: Ha'aretz (and check out all the anti-Semitic comments while you're at it.)

I bet if she was a moslime she would be able to wear her dirty scarf!

It would have been nice to see all the girls on the team wear a t-shirt in solidarity.

to follow up on Anon...i don't understand why her teammates all don't wear the same t-shirt. ???

While anti-Semitism may still be a problem in Poland, the funny thing is that there is also a phenomenon of philo-Semitism, in which non-Jews do things like start klezmer bands (and sometimes, convert). This is especially the case in Krakov, I gather. A few months ago, there was a news story about a neo-Nazi who found out he was of Jewish ancestry and became an Orthodox Jew.

Good for her! Let the Poles stew in their garbage.

If they all have to dress alike, let the whole team wear a T-Shirt under their uniform.

Indeed. Contrast with the treatment received by a Muslim weightlifter for the same issue, here...

Is a religious girl allowed to perform in front of men, or is this a chumra? And I second the others about this:
- same issue of Moslem girls who'd want to wear their scarves
- why doesn't the team wear tshirts in solidarity?

For all those people talking about solidarity, it's *both* teams that need to dress alike. The other side would take the forfeit victory.

This sometimes happens at YU- some players wear kippot, some don't. It's officially against the rules, but the other side doesn't make a deal. If they want to be jerks, YU forfeits (even though they'd probably have enough players anyway), and wins a moral victory.

Why would you bother doing that for the idiot leftist pp commenter? You don't need readers like her.