Remember the Mavi Marmara? That "peaceful", "unarmed" flotilla ship of peace activists on its way to Gaza.

Well, Yediot (Hebrew) has released photos of armed peace activists openly walking around the ship with automatic weapons (the same ship Arab MK Zuabi was on, all the while claiming she saw no weapons). 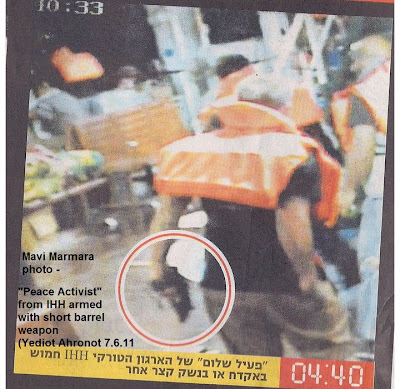 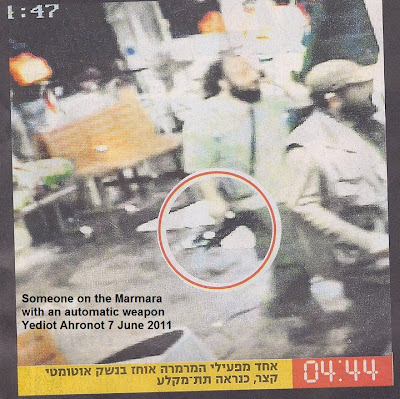 As for the IDF, these pictures aren't from them. They have their own set of photos which they haven't released yet - for reasons that are beyond me. I'd like to say, better late than never, but that doesn't even apply yet.

Why wait a year to release the pix. It is beyond me.

Doesn't make any sense. So there were automatic weapons on board, and the shayetet commandos went in with paintball guns? Something's missing.

this is a great scoop. why is no one else writing about this? and why didn't the commando's themselves mention this in their extensive interviews afterwards? why wouldn't the israeli government make an issue of this, especially under media fire at the time? i REALLY don't want to but i smell fish.

What was missing till now were confirming photos. These photos apparently came from cameras of those on board.

What stinks is how long it took them to expose the pictures.

joe, all due respect: i'm sure you can see the difference between "armed" and "carrying machine guns". i remember the reports from the time- the "weapon" thrown overboard was said by everyone to be a pistol. if i remember correctly the caliber was also mentioned, i think a .38. why didn't the army use these pictures or even mention this at the time? in fact they still haven't. the fish is starting to stink. i don't think ehud barak is any brighter than you do but it's a pretty far stretch to chalk this up to his stupidity. also the photos are grainy in the extreme. i don't necessarily believe what every big red circle with a caption tells me i'm seeing. i'm sure jameel can recognize the make and model of these weapons. i'm sure jameel can make out their serial numbers. but not me. we all saw extensive footage of the struggle/battle complete with audio. there was no automatic fire. there would be no point for the "activists" to have these things, since their purpose was martyrdom, not victory. this makes no sense.

sorry, i guess my memory isn't so good, i should have looked it up before i posted. found an old j.post article that mentions "weapons" (plural) and specifically RIFLE cartriges. i apologize. i still wonder why these photos appeared only now in the papers and the idf didn't use them, and i still can't really make out what's in the photos but i realize this doesn't necessarily mean anything. forgive me?

The problem is that the IDF is afraid to release any information, and when it does so, it is either in a small trickle and far too late, or (IMHO) because someone takes it upon themselves to release it (which is what I think happened here).

tnks .:) good shabbos. tell jameel too. keep up the good work (after shabbos).

Great to see that the public is beginning to see the truth behind this situation. I would like to invite you to check out Prevent the IHH Flotilla Towards Gaza http://www.facebook.com/pages/Prevent-the-IHH-Flotilla-Towards-Gaza/117646254988615

Thanks for your support.