I have to hand it to Likud Minister of Education Gidon Saar. He promised and he delivered.

One of Gidon’s goals during his term as Minister of Education is to return to the education system parts of it that were uprooted by former holders of this important position. Specifically those parts related to basic Judaism.

In February he announced that he was introducing 1-day trips for high school students to Hebron and Ma’arat Hamachpela (Tomb of the Patriarchs).

The Left went bonkers. Every explanation was given as to why this idea should be killed before it got off the ground, “the Occupation”, security, brainwashing (no kidding, the head of Meretz said that), you name it.

The idea that Jewish children would visit the city and tomb of our ancestors, what was once King David’s royal city, frightens the bejeebers out of the Left – after all, what might the students learn there? Jewish history?

But Gidon was determined that all the students of Israel learn the basics of their heritage, not just the religious ones.

This past week, the pilot program kicked off with students of a state (not religious) school from Beit Shemesh. Participation was optional, and despite that, there was over 95% attendance from 11th and 12th graders (and not a few parents too who tagged along).

The students visited the Ma’arah and read some psukim from the Torah related to Avraham’s purchase of the cave. Afterwards they visited Beit Hadassah (read the link). 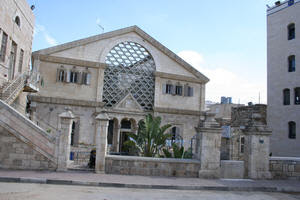 Jews are only permitted in around 7% of the city. The other 93% is Judenrein, so there is a limit to how many places Jews can visit in Hebron, though we do have access to most of the important grave-sites of our ancestors.

Meanwhile, the students’ responses were amazing.

The kids asked basic questions such as, “Why haven’t we heard about this place before? How is this place so close, yet we never came here before? How come this history isn’t taught in school?”

And the discussions were open. Students asked about the Arab-Jewish relationships and other relevant issues of the day.

Ignorance was not part of this curriculum.

In short, while Meretz wanted to keep Jewish children ignorant of their history and their ties to their country, Gidon Saar opened their eyes to what Meretz and the Left are desperate to hide.

Jameel and Trep took our family there in 2007 and as far as I'm concerned it was the most important part of the trip. The "conflict" may be fought and lost in the schools as far as I'm concerned. Let's think about what well tell our children and what the Arabs are telling theirs. Who is going to win that battle?