The US State Department announced sanctions against 7 companies who did business with Iran. One of those companies was the Israeli Ofer Brothers Group as their company was apparently involved in selling a tanker to Iran in September 2010. (And there are those that say the announcement was timed to embarrass Netanyahu, but that is not the subject of this post).

Furthermore, additional checking showed that ships belonging to them docked in Iran 13 times in the past decade.

The Ofer family is Israel's wealthiest family valued at over $10.3 billions dollars, and are considered one of the small group of super rich Israelis that own/control/influence much of the Israeli economy. 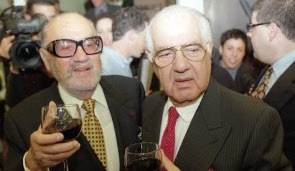 Following the US sanctions announcement, many different messages and explanations came out from the Ofer Brothers and other interested parties.

Iran themselves unequivocally stated that they have not done and would not do any business with Zionists.


A Knesset committee met on Tuesday to discuss the Ofer Brothers and try to get to the bottom of all this.

Shama says the note was not from a political or business source.

Below is the alleged note. 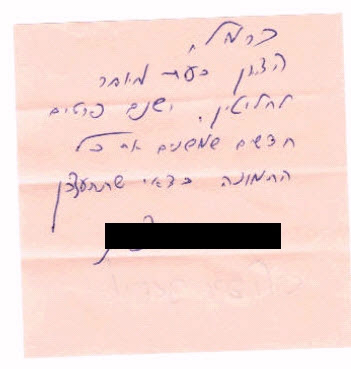 The note says, "Carmel, the discussion is now irrelevant. There are new details that change the whole picture. It would be best if you were updated. [The signature is blocked out]."

Whoever wrote the note, Carmel considered the source serious enough to end the meeting.

If it's true that the source was not political or business related, then at this point one might venture to say that the Israeli government used the Ofer Brothers to get something into or out of Iran.

If that's the case, then potentially the US State Department exposed a secret Israeli operation against Iran.

The other possibility is that the Ofer Brothers were doing business with Iran, and this is them interfering with the investigative process (and the new detail is the amount in someone's bank account?).

But to top it all off, Carmel bothered to respond that the above note is a fake, possibly rendering this entire post moot (or not).

What do you think the note said?

UPDATE: Here is a picture of MK Carmel Shama Hacohen holding the real note (clearly not the same). 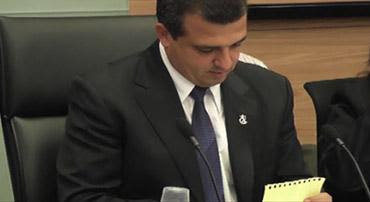 I would tend to doubt that a ship known to be Israeli or owned by Israelis would be used for covert operations in Iran. But who knows?

Update: A photo of Carmel holding the real note is up. Not the same.

Reshet Bet is currently hinting that Ofer's ship's trips to Iran were used to ferry Mossad agents in and out.

I'd love for you to do some indepth reporting on this. Is this a case of ZIM shipping in Qatar?

And now you know what was written on the note!