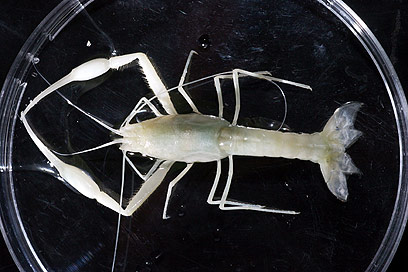 Photo Credit: Sasson Tiram
The headline in Yediot Achronot's Erev Chag edition said something about a "mystery cave," but the pictures and actual story were a lot cooler.

In a subterranean cave never before explored or touched by man, a new ecosystem exists -- a food chain ranging from 1 milimeter beings to 7 centimeters; and most of these creatures are brand new speciees never before discovered.

Researchers were amazed to discover eight species of previously unknown invertebrates, bacteria and single-cell organisms in the heart of an active quarry in the southern city of Ramle. Factory administrators vowed to give researchers free access to the cave and to keep it intact.

The cave, which spans across 2.5 kilometers (roughly 1.5 miles) and is 100-meter (roughly 30 feet) deep, is the second largest lime cave in Israel. In order to explore the cave researchers are required to climb ropes and crawl through most of it. Due to its scientific significance and the fact it is located inside an active quarry, the cave is currently closed to visitors.

Before you leave (and I'll have a few more interesting posts up today) I just wanted to mention something else about YNETnews. While they sometimes have fascinating stories it's unfortunately a rather low-brow newspaper. It's a tough competition between YNET and Maariv/NRG to see who can stoop lower. YNET has a pros and cons article about infidelity (link NOT provided), so Maariv/NRG countered with their headline, "Naaseh Vnishma? Its all *&^%$"

One can argue whether midrashim are literal or not as DovBear does all the time -- he even examines the same midrash. But sensationalist headlines that lump the message of midrashim together with inappropriate language is just immature, crass, and typical of these newspapers.

I wonder what the midrash-bashing-author's requirements are to convert to secularism (item #3)?

I hope they didn't find any copepods in the water.

Truly amazing. Reminds me of part of the plot of Dan Browns' Deception Point.

I guess there really IS something new under the sun...

Thh JP also had this on the front page Erev Chag.

That is just amazing! There is always more to learn about our world :)