Reports state that Israeli Border police plan to begin the destruction of Ramat Gilad in the Shomron within the next few hours.

Ramat Gilad was founded in memory of Gilad Zar, murdered by Palestinian Authority Policemen in 2001. 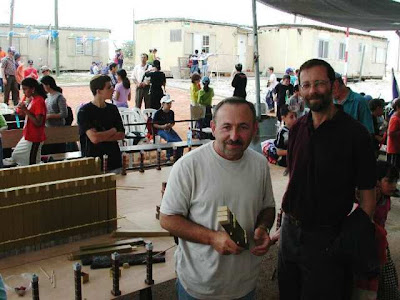 On Ramat Gilad at an earlier date
Ehud Barak has begun preparing his forces to destroy the homes on this legally purchased hill - in the hopes of both brown-nosing Obama and looking relevant to the Labor party which is (as usual) doubting his leadership capabilities. It is presumed that Bibi Netanyahu has played a role in the decision making process.

(Ehud Barak is known for his disinformation tactics and other games to tire out and distract citizens before destroying their legally purchased homes, but this information regarding the timing is believed to be reliable).


In addition, the town of Karnei Shomron (next to Ramat Gilad) came under Cyberattack by the government when electricity and internet access was disconnected for 10 minutes immediately after emails went out to the community mailing list calling for concerned citizens to go up to Ramat Gilad to prevent this immoral act of destruction.

As it only delayed the dissemination of the electronic alerts, it is believed the government did this as a threat and warning to the residents, as opposed to a full-scale attempt to block any alerts from going out.


Since then, local residents of Northern Shomron are arriving en masse at Ramat Gilad to protest and try to prevent this act of evil.

Massive prayer service is called for 7:00 AM.


Gilad Zar was one of the founders of Itamar, and was murdered by Palestinian policemen in 2001 who shot him at point-blank range. He is survived by his wife and 8 children.

Gilad Zar
Moshe Zar, his father, who legally bought the land outright (and has signed permissions and documentation from all relevant regional and government authorities and offices attesting to both his ownership and his right to live and build there - except for, from Ehud Barak), was a commando in Unit 101 - Ariel Sharon's special forces unit.

The Zar family has been subject to repeated assassination attempts by the Palestinian Authority - because they are responsible for the private purchase of thousands of dunams (many hundreds of acres) of land from Arab landowners for Jews.

Pictures of massive police violence from a previous attempt to destroy Havat Gilad can be seen here.

More details and pictures from the hill to follow.

Joesettler, prayer is not going to accomplish anything. It is going to get real rough for the settlers. The world is taking it's last shot at us. HaShem is not opening to doors yet.

What's needed is resistance. The government can only uproot Jews by force. It can never persuade them to relinquish their land. And the Jews will be back so the government's move will just be a pointless waste of Israeli taxpayers' money.