Smuggling a terrorist through this illegal tunnel between Egypt and Gaza, the Palestinian goat is in violation of international law. (Guardian) 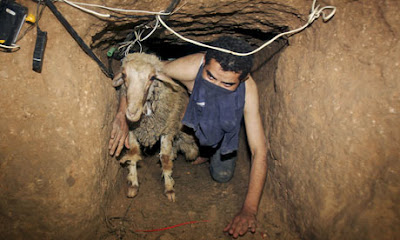 Carter demanded that Israel "lift a blockade on the Palestinian enclave and stop treating its residents like "savages."

"I am very affected. I must hold back my tears at seeing the destruction that was inflicted on your people," he said.

"I came to the American School. It taught your children, it was funded by my country and I see that it was deliberately destroyed by bombs dropped by F-16 manufactured in my country. I feel partly responsible for what happened and all the Americans and the Israelis must have the same feeling," he added. (YNET)

Barely reported, but Israel confirmed reports that there was a failed assassination attempt against Weepy Jimmy today in Gaza. A roadside bomb was found and diffused by Hamas forces minutes before Carter's motorcade was due to pass along side it, in Gaza.

That is quite obviously a sheep not a goat.

Dhimmi Carter should have been sent to the great peace conference of the sky along with the clueless Knesset idiots who hung on his every word. Such people will get the rest of us all killed.

ITS NOT A SHEEP, ITS A SHIDDUCH FOR THE GAY PARADE IN PALASTINIAN JERUSALEM
IF U CANT GET IT IN LEGALLY, USE THE BACK DOOR!!

Boohoo, what a pussy Carter is for feeling sad about 800+ people dying, someone call a waaaaaaahmbulance