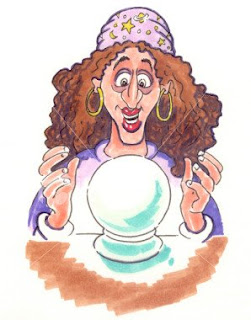 The raid included all of the above, included Homeopathic, Chinese medicine and holistic "healers", as well as those who arrange marriages...shadchanim.

Armed with detailed intelligence briefings from newspapers and the internet, the tax authority executed their plan like a military operation.

In one case, a tax authority undercover agent approached an astrologer, requesting help to predict the future for her business opportunities. The agent paid for the "service" and received a receipt without any details of the service she received. The astrologer was then investigated and found not be be keeping her financial books, "in order."

In another case, an agent pretended to be "single" and looking for a marriage partner -- he approached a "shadchan" marriage-broker, paid hundreds of Shekels, and received a list of potential prospects. The agent also had to sign a document that in the event a marriage ensued, he would pay thousands of shekels to the shadchan.

On the day that the tax authorities arrived, the shadchan claimed that she does the service as a "mitzva" (charitable act) and takes no money for her services....till the authorities brought in their undercover agent and reminder her that she made him pay for the "mitzva"...

Wouldn't you have thought that at least one of the astrologers would have foreseen the raid?

Jameel, this is so typical of 'business in Israel' and you have turned it into a real v'na.who.pay.whoo :-)

'minds one of those phone-in psychic programs on radio. You know? Where the host asks the caller's name, and .... [but wait a minute! If this psychic is for real, wouldn't he know my name already without me telling?!]

what is this about alternative medicine doctors?

They are not in the catagory of false prophets... something stinks

it's even funnier that the tax folks used the same headline in their announcement to the press . Who said Income Tax bureaucrats don't have a sense of humor?

MAOZ: That's great. I need to remember that one.

As far as I know, reputable astrologers keep honest books.

And yes, there are reputable astrologers.

And of course, the shadchanim are up there with the astrologers.

I'd actually pay money to know in advance how iran turns out, ahead. So, why is the service, considered a service, if they can't tell you diddley about future events.

If I was their lawyer I'd claim all the "profits" had to be given back in refunds.