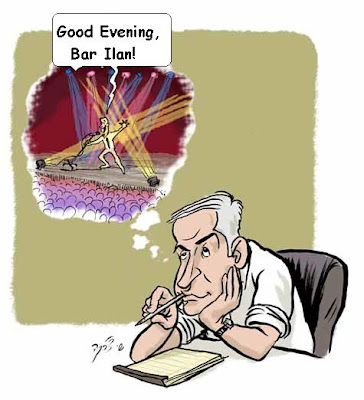 So what will Prime Minister Netanyahu say this evening at the much anticipated "Bar Ilan" speech?

The JPost reports that the Palestinian Authority has strict guidelines for Netanyahu:

On the eve of Prime Minister Binyamin Netanyahu's speech in which he is supposed to outline his government's strategy with respect to the peace process, the Palestinian Authority said it would not accept any solution that does not include an immediate halt to settlement construction and the establishment of an independent and sovereign state. 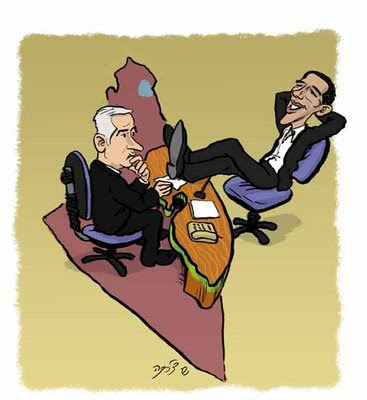 Unfortunately, these PA demands dovetail identically with those of US President Obama, who said that all of Israel's "illegitimate" settlements in the West Bank, including those around Jerusalem, "must stop". Obama also called for "2 states"...which is what the PA says is "the establishment of an independent and sovereign state."

Haaretz reports that instead of focusing on the Palestinians, Netanyahu will discuss the dangers of a nuclear Iran -- and the election win of Ahmadinejad makes it all the more easier for this to be the majority of his speech.

Prime Minister Benjamin Netanyahu is expected to devote a more significant part of his greatly anticipated foreign policy speech to the Iranian threat, officials close to the premier said, in the wake of Iranian President Mahmoud Ahmadinejad's electoral win Saturday.

The officials added that this is a golden opportunity for Netanyahu to stress the issue before the world, after having called for years to stop Iranian nuclearization. The speech comes in the wake of tremendous pressure from United States President Barack Obama on Netanyahu to back the establishment of a Palestinian state and declare a freeze on West Bank settlement construction.

Meanwhile, Netanyahu vowed Friday that he would not permit the establishment of a Hamas-ruled Palestinian state in the West Bank.

"We will not allow the establishment of a Hamas state in the West Bank as well," Netanyahu told the European Union policy chief Javier Solana in Jerusalem.

My take? I don't think there will be anything too significant in this speech; Netanyahu will not stop settlement construction -- it won't be our heyday of construction, but it won't stop.

And in terms of the Palestinians, I have full faith that whatever gestures Netanyahu will come up with, they will ensure that terror will follow.

Will Bibi Speak in English or Hebrew?

Who is his audience for this speech?

Tonight also happens to be the graduation ceremony at Bar Ilan which I am attending to see my daughter get her diploma. When I heard that both are scheduled for 8PM I thought that there might be a link between them e.g. that Netanyahu was giving a Keynote speech to the graduates. But nope, hey are just parallel events that happen to be taking place at the same time on the campus.

While I'm a bit sorry that I'll miss Netanyahu's speech, in a way it's just as well. We weren't told to get there umpteen hours early for security checks. If we just showed up "on time" and Netanyahu were speaking I suspect we'd be closed out.

My daughter works at one of the libraries on campus and reported that from the morning they were checking everyone's ID and backpacks unlike most days when the check is pretty cursory.

My one concession to the activities taking place is to go by bus rather than drive. Parking is sure to be a mess.

I still say that Bibi should let the world know that Israel is a all grown up now (60 amazing years) and will decide about its own future, and does not want another struggling nation to tell it what to do, or how to live. Suicide is not an option.

Of course, in Hebrew, and with 'secrecy-laden-innuendos' just like Obama's.

Umm, not to go off topic, but whatever happened to that Srugim interview?