Haaretz's Gideon Levy can't stand that anyone has a good word to say about settlers, which is why the following statement blew his mind.

"I love the settlers, they are the salt of the earth...the insufferable ease with which they are denigrated and harmed and the statements made against them is just disgusting." (Ha'aretz)

That statement was made by none other than Police Major General Shlomi Katbi, outgoing commander of the "Shai" region (Shomron and Yehuda; "West Bank").

Knowing the source of the denigration, he threw his barbs at Tel Aviv, who described his his words, "whose willingness to contribute to the state is one big zero."

Katbi, who will retire from the police force after 30 years of service, launched a lengthy verbal diatribe against "those who sit in Tel Aviv, park their jeeps on the sidewalk on Sheinkin Street, drink espresso with one foot resting on the other, and allow themselves to level criticism and to tell stories."

Personally, I know many people in Tel Aviv who do contribute to Israel -- but they aren't the ones castigating the settlers around the clock.

Gideon Levy spews out the following:

Tel Aviv is the oasis of normalcy in an insane country. Between the espresso and the SUV arise art, culture, finance, science, intellect, media, openness and a healthy (albeit insufficient) introspection of the State of Israel, without which it has no real backbone. May God protect Israel if, heaven forbid, it ever turns into Yitzhar: violent, isolated, conservative, religious and backward. May God protect it if the majority of its police officers think like Katabi. Yes, we sit with out legs crossed on Sheinkin Street, sip espresso, and some of us even park our SUVs on the sidewalk. But at least it's our sidewalk, not a stolen sidewalk that belongs to another nation.

It's time to call a spade a spade -- the Palestinians consider Giedon Levy a settler just as much as me. While the settlement I'm living in wasn't stolen from anyone, and was "State's Land" before 1967, without any private person living on it, Tel Aviv, and many of the Leftist hideouts in pre-1967 Israel were Arab villages. 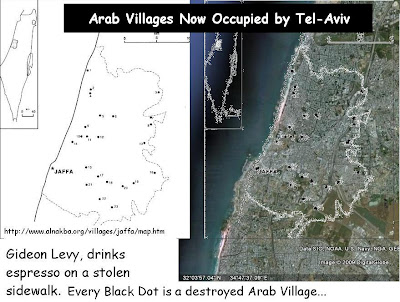 Israel's founding was turbulent and difficult, but to dump all of Gideon Levy's guilt on the settlers is totally hypocritical.

Levy's "willingness to contribute to the state is one big zero"...as opposed to the settlers.

Whenever I get dragged into a "debate" by my lefty friends about Israeli occupation, I always ask the following questions:

1. Doesn't Israel deserve the lands they conquered in the three seperate times they were faced by multiple-front invasion by nations attempting to wipe them off the map? No?

I hope Bibi holds firm against Obama on the settlement issue. Time is on Israels side on this issue (if not on most other issues). Obama has at best 3 years to bring down the hammer, which is the blink of an eye in mid-east politics.

plenty of people, from all over the country, contribute in different ways to the State. The settlers contribute no less than anyone else, and often more.

Rafi: Except in the convoluted mind of Gideon Levy.

While many of the lefties of Tel Aviv are grandchildren of pioneers who fought for the state, ( but committed infractions such as ignoring Shoah and pais cutting) what have they done lately?
Amos Oz in his book-" in the land of Israel" castigated the settlers for not producing "art"!
Ok , if bad songs about a rock or tree, or bad rock bands or hip-hop violins or transsexual singing is art, I'd rather be a settler.
Moreover , the Tel avivians have lost there will. That is why 1 million yordim live in the US et al. Yes there are some ortho yordim, but the vast majority make twice a year mcdonalds eating reform look frum

Daniel; Just to be fair, despite their bad press, there are settler supporters in Tel Aviv!

And there are those who serve in the IDF...volunteer for MDA...and even learn in yeshivot.

Despite Gideon Levy, Tel Aviv's not that awful a place ;-)

True,
but the last time I was there it wasn't easy finding a kosher restaurant

It seems Levy can't possibly comprehend that someone who actually knows the law and order situation on the ground - first hand (and not from fake videos gone viral about the horrible settlers) - would actually be just that - someone who knows what is going on.

Could it be (gasp) that the settlers are NOT the ones that have contributed to the criminality?

One more thing - if it weren't for people that insisted, for thousands of years, on remaining "isolated, conservative, religious and backward" Levy would probably be a Christian German today...

I disagree that Gideon Levy's contribution to the state is "one big zero". I wish he were so innocuous.
Gideon Levy, hater of Zionism past and present in all its forms and apologist extraordinaire, is far, far more destructive than that.

Gideon Levy and Akiva Elder have long loathed the revanants. It never occurs to them that if the Jews weren't in Yizhar, they wouldn't be able to sip their espresso in peace. Its the very people they malign and hate that allows them to post op ed pieces in Haaretz completely disconnected from reality. And that's not a compliment to the likes of them on Israel's Left.

Obama has at best 3 years to bring down the hammer, which is the blink of an eye in mid-east politics.

Obama has 3 years to talk, talk, talk, and talk some more. Then after November 2012, he can "bring down the hammer".

I thought Tel Aviv was built on empty sand dunes (at least that's what those pictures from 100 years ago look like).

But the point of my comment is to question your reference to the map on the alnakba.org website as authoritative on the question of destroyed pre-'48 Arab villages. Am surprised that you'd give it such credence.

Seriously Jameel, if you trust Palestinian propaganda on this point, it would only be honest to trust them on many other things which don't match your political outlook.

(Personally, I don't trust them on anything)

amyrpk: Its a fact that Tel Aviv University is built on the ruins Sheikh Munis village.

Shlomo: While I dont trust PA propoganda as much as I can throw it, its known that Tel Aviv exists on at least a few Arab villages.

However, the point is even if we don't believe it -- the raging Lefists Gideon Levy should believe it (because according to him, we have no claim to any part of Israel)...for him to hyporcritize that the settlements are stolen land, but not the cafe where he sips espresso is simply trash.