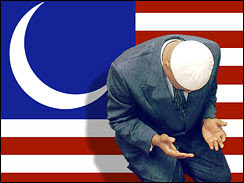 “I think that the United States and the West generally, we have to educate ourselves more effectively on Islam.

And one of the points I want to make is, is that if you actually took the number of Muslims Americans, we'd be one of the largest Muslim countries in the world. “


Exactly what alternative reality does the President of the United States live in?

Perhaps it’s time he learns how to Google on his Blackberry.

A quick look on Wiki provides a very different picture that the one the President is fantasizing about.

Note: The most commonly accepted figure from census data and multiple research studies on Muslims in America is approximately 1.8 million (out of 300 million Americans). CAIR and other militant Islamic groups make the unsupported claim of 8 million, but they have no data to back that up other than their own wild claims.

One chart in the Wiki mentioned above places the US at an impossible 38, but that is only by claiming 4.5 million Muslims in America - which directly contradicts the chart on top (and all the research) that places the number between 1.8-3 million!

Now, even if Obama is basing his statements on unfounded statements by militant Islamic groups with their clear agendas, as opposed to research from multiple, independent and unbiased research studies – that would still place the US only somewhere around the low 30s on the list.

Either way, quite far from being “one of the largest Muslim Countries in the World”.

Could this just be wishful thinking on the President’s part?

On another related issue, the President said, "And I think there have been times where we are not as honest as we should be about the fact...".

Now it could be that Obama has a problem with his honesty (ya think?), or perhaps he has simply aligned himself with the Muslim sector, and honesty be damned.

Or maybe it is time Obama educates himself more effectively on Islam - before creating policies that are bad for America (and of course, bad for Israel).

Or perhaps he actually meant to say, "The most powerful country in the world is led by a Muslim - Barack Hussein Obama" - that I could believe.

Obama may be great orator, but he is clearly far from as smart as he thinks he is.

As much as he tries to hide his agendas in his speeches and flip-flopping, his actual opinions always seep through if you are listenin.

One merely needs to examine his choice of words and phrases to learn what he is really trying to accomplish.

Will the US media call him on this? The Washington Post did, but what about CNN and the NY Times?

Will they excuse him, or finally admit his vision and facts are distorted?

Maybe he meant to say:

if you actually took the number of Jewish Americans, we'd be one of the largest Jewish countries in the world.

Maybe he meant to say:

if you actually took the number of African-Americans, we'd be one of the largest African countries in the world.

Come on, the teleprompter got turned off.

And before Obama won the elections, the pundits were worried that they wouldn't have any fodder to make fun of Obama with.

Unfortunately they still don't. It's too serious to be funny.

Does DOV BEAR know he lives in one of the largest Moslem countries in the world?

Actually, Obama's claim regarding the size of the U.S. Muslim population might be correct, if you count all 57 states.

The O'Bastard is threatening Netanyahu again. This is getting seriously awful. Who does this $*(#%^& Muslim think he is? http://israelmatzav.blogspot.com/2009/06/obama-to-netanyahu-go-find-another.html#links

We Israelis need a lot of street action - starting tonight with the Nobama rally. We need more - around the country. And something like the orange ribbon - like a blue & white ribbon!

Interestingly, there are 57 states in the Islamic Conference...

When you apply your brain rationally to whatever O says you won't understand where he's coming from.

OTH if you understand the terms 'subversive', 'twisting', 'contorting' and overt 'lying' you will realize that this is the "normal" agenda of the muslims/Islam/arab mentality. They make 'truth' out of their lies!

This is part of Hussein's brainwashing techniques, slowly he gets his adherents (leftist/liberal/socialist) to 'believe' what he says, and then they act on it. They make 'truth' from his lies. This is what has been going on for years in the ME; Israelis (and Jews all over the world) need to recognize this for what it is: the Islamic mentality. And now it is being applied to a once great nation, America, but that now is falling into liberal disarray.
Try reading: http://homelandsecurityus.com/
and http://redemption5768.blogspot.com/

“I think that the United States and the West generally, we have to educate ourselves more effectively on Islam.

What does this even mean? Why do others need to apologize for MUSLIM behavior around the world as if WE are the ones not educated enough.

What does Joe the Plumber have to say about all this ?

Obama is a Muslim by descent, name and professed sympathies. It does not really matter if he doesn't formally adhere to Islam. Muslims can see by his values and conduct that he is one of them. That's all that needs to be said.

He also said in the same interview:

"France is one of the most important countries in the world and helps to set trends in how we deal with everything from climate change to the global recession."

Meanwhile, though this doesn't excuse Obama in any way, can you say what happened that led JPost to write: "Earlier Wednesday, right-wing activists allegedly set fire to Palestinian fields near Shavei Shomron following the dismantlement of Ramat Migron and Maoz Esther."?

Did they do it?

tryingtounderstand: it happened, its abhorrent. I repeat this to my kids on a daily basis...and whenever they go to outposts -- G-d forbid they should do anything like that.

The government doesn't encourage people to respect the law when it assaults them in the name of the law. How do Jews living in the middle of nowhere threaten America? I would love to know the answer.

I'm sad that we're doing the obama's a muslim crap. How about some informed arguments.
And better, what happened to Srugim 2.0?

It's not about Obama is a Muslim. It's about the bad stuff Obama wants to do to Israel.

Besides, I want to first read about the secret caves, and then about Srugim 2.0.

Obama is a liar and we'll pay the four next year !!

Yes, Joe Settler, let Jamaal bring on the sodim of the Meoras haWafflim! :-)

Mr. "honest" also rewrites the Koran. He claimed in his Cairo speech that the "Holy" Koran says Muslims must always speak the truth. Ha!