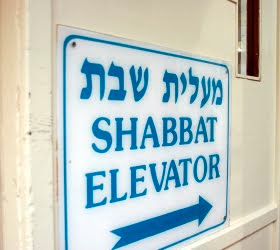 "In one shot, the announcement turns the Shabbat of sick and elderly from pleasure to distress. Every Rabbi signed on the ruling received from me numerous requests to meet with me [to discuss the Shabbat Elevator issue], but I received no answers."

Interviewed on the Chareidim website, R' Rosen stated he is obligated to listen to the Rabbis, but only after they meet with him and here my reasons in favor of a Shabbat elevator. If afterwards, they will issue a halachik ruling, I will follow it. He added, "Meanwhile, the Rabbis have never heard this side of the issue [in favor of Shabbat elevators]. I have proof that great Charedi/Ultra Orthodox Rabbis use Shabbat elevators in hotels on Shabbat.

According to R' Rosen, he and the Tzomet Institue rely on the rabbinic rulings of R' Shlomo Zalman Aurbach and his students such as R' Yehoshua Neubert, the author of Shmirat Shabbat k'Hilchata.

"It is inconceivable that one announcement changes Shabbat from a day of pleasure to a difficult day despair."

TheYeshivaWorld follows up with the following quoting from an interview on Radio Kol Chai:

In addition, Rabbi Rosen questions those in the “court of the rabbonim”, explaining gedolim are obviously called upon to affix their signatures by rabbis who have access to them deciding to bring this specific issue to their attention. He asked how such a decision can be reached, quoting experts in the field, when Zomet, which is one of two institutes in the field working to find technological advances that can be incorporated into permitted shabbos use, was not contacted by any of the rabbonim who brought this to the attention of gedolei yisrael shlita. He stated, “I am not a ‘bal plugta’ with any of the gedolim” but question how such a ruling can be issued without even conferring with rabbinical experts such as those at Zomet.

Rabbi Rosen added that it is difficult for him to comment since the p’sak circulating in chareidi circles is not detailed.

Rabbi Rosen told Kol Chai Radio that he feels the gedolim at times are led by those who have access to them, pushing certain issues before them and in this case, opting to ignore the experts who address the issues for the past years, relying on torah giants such as Reb Shlomo Zalman.

Never a dull moment in the Chumrah-of-the-Week zone...
:-)

Its rare to find a wise man steeped both in the Torah and the intricacies of modern technology. Sometimes the answer is clear - one may break Shabbat to defend one's life or to save the life of another. At other times the situation does not allow one to transgress it.

Joel - thanks for that! Gmar Tov.

Its rare to find a wise man steeped both in the Torah and the intricacies of modern technology. Sometimes the answer is clear - one may break Shabbat to defend one's life or to save the life of another