Who needs to go to a foreign country

It used to be that if you wanted to see examples of obscene art glorifying terrorists, suicide bombers and murderers you had to go to Palestinian schools or European art exhibits.

Our local Leftists are now developing their own version of this genre right here to Israel - in Tel Aviv of course.

Such as this one, depicting a female Palestinian suicide bomber as the Virgin Mary holding a baby. 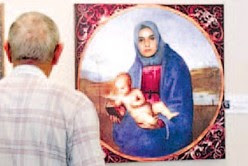 But once relatives of Israeli terror victims found out they began to complain and protest.

The artists defended their work - as would be expected.

In response the Sokolov House (the headquarters of the Israeli Journalists Association) which exhibited this trash, took down some of the offensive exhibits, but not all of them.

Earn El Al tickets to Israel and other rewards with the HAS Advantage Credit Card!
No annual fee. No sign up fee.

Tel Aviv is a foreign country.

While this is disgusting and the artists should become outcasts in society, I also believe that the freedom of expression is very important. Let these idiots show the world how ignorant they are. Instead of demanding they be taken down (censored), the correct response would be to use these as an example of how much of a problem these people are. Use their own momentum against them.

Maybe you should take a second and just listen to the artists behind the exhibition. They did not try to glorify the terrorists, but to juxtapose the female bombers with a classical image of motherhood and sainthood. They are trying to say, in essence, "These Arab women could have been life-giving, loving mothers, like the 'holy virgin', but they chose to become murderers." They are trying to convey the immense human potential for good, and for evil, the complexity of humankind, the duality of humankind.

And maybe they should have added a painting of Hitler in there too, just to make sure we got their message.