Barak Sends in the Troops to Destroy More Homes

"Security personnel" destroyed a wooden home in the Tekoa Daled outpost yesterday that belonged to a young couple with a two-week-old baby.

The JPost quotes "Itzhak Makover" -- a relative of the Carlebach family, whose home was destroyed.

Resident Itzhak Makover said that border policemen and soldiers arrived at their small outpost of 20 families around 4 a.m., surrounded the home, which was built over a year ago, and destroyed it. He added that the man who lived in the house had only one leg [Jameel adds, and the man's wife gave birth by C-section 2 weeks earlier]

Before arriving at the outpost, located just south of Jerusalem in Gush Etzion, the IDF took down the telephone lines, Makover said.

But they left the cellphones intact, he said and added that he was alerted to the IDF presence by the guard in the nearby Tekoa settlement.

By the time he got there, the IDF was already destroying the home, Makover said.

Tekoa residents believe that the outpost, which is made up mostly of caravans, is part of their settlement.

According to the 2005 Sasson Report, the outpost is located 1.8 kilometers outside of the settlement. According to the report it was erected in 2001 without the necessary permits, but with NIS 150,000 from the Ministry of Construction and Housing.

So the Ministry of Construction helps build the community and then Defense Minister Ehud Barak sends in the troops to destroy the home at 4 AM.

Here are some exclusive photos of the home's destruction taken by Shilo Kinarti.

These photos may NOT be reproduced without express permission from the photographer (contact the Muqata Blog for info -- muqata@gmail.com)

4 AM: Ehud Barak's Tractor begins to destroy the home. 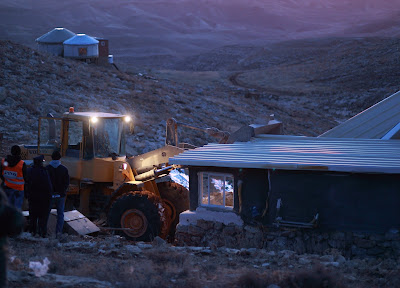 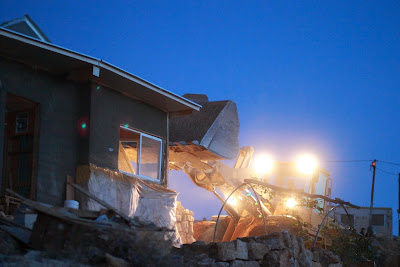 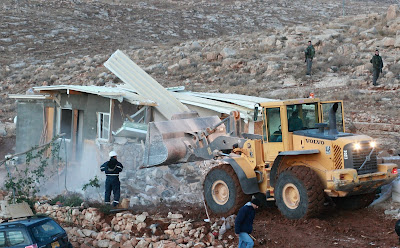 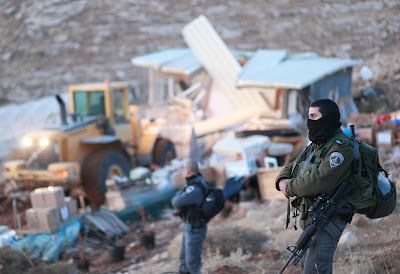 Why is his face masked? 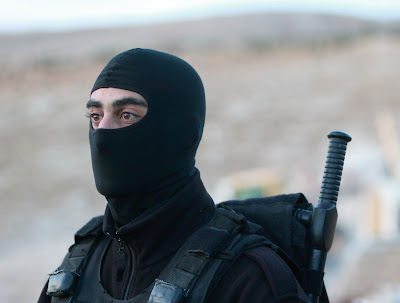 A couple watches the destruction: 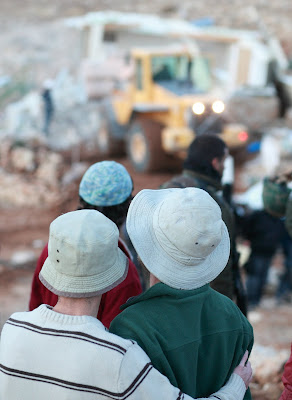 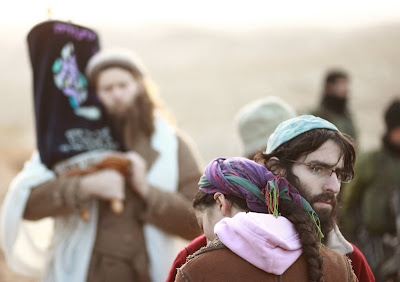 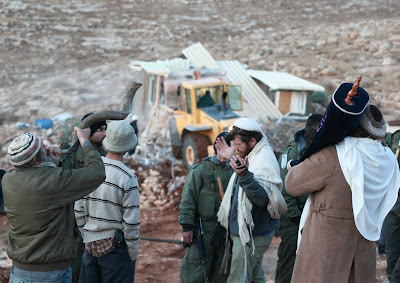 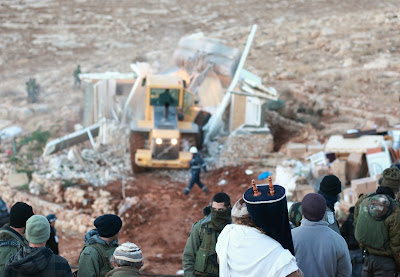 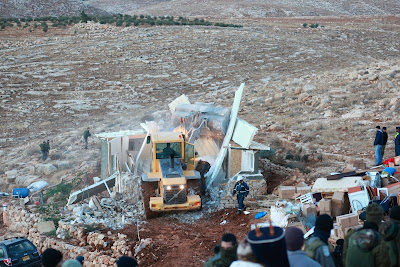 After the destruction is over, the troops leave. 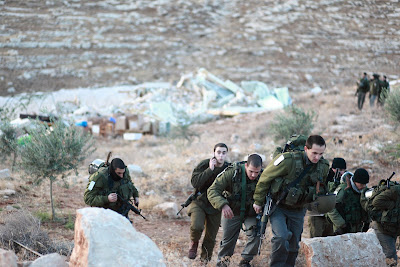 If you wish to help the Carlebach family rebuild their home, donations can be sent to
Bank Mizrahi branch #454, account #158982.

I'm sure they're destroying illegal Palestinian and Arab homes with the same veracity and frequency. Right? Because that would be racist if they weren't.
-OC

Why did Barak choose to destroy a house that day? Because George Mitchell was arriving and Barak wanted to give Mitchell a present.

Also, the house was made of stone, not just wood.

In the old days, settlers would destroy an illegal arab home as payback.
too bad the
officer was wearing a mask. all of their faces should be photographed and posted on the web

Ahem. Netanyahu and Barak send in troops to destroy more homes. And this is exactly why Netanyahu chose barak as his defense minister.

"Why is his face masked?"

Let's be a bit Dam L'Chaf Zchus: He's probably covering his face because he doesn't want to be identified (i.e. by people photographing him for later) directly for having a part in this. Perhaps he disagrees with what's going on, but simply isn't willing to sit in a military prison for that idea, but is part of the unit being made to do this. These are just his orders. The blame for the destruction lies with the politicians who keep this up, not the individuals who carry it out.

> The blame for the destruction lies with the politicians who keep this up, not the individuals who carry it out.

Anyone with a hand in it is responsible.

Masked cops - because they know they'll be identified for doing what's wrong.

They haven't yet learned their lesson, from Barack on down.

Anon, in the words of HaRav Shlomo Aviner regarding the expulsions (and similarly for these activities):