The "kikar-shabbat" Chareidi/Ultra-Orthodox website is publicizing a halachik ruling from the Yated Neeman newspaper which quotes Rabbinic Leader R' Elyashiv, that it is forbidden to visit the Kotel on Shabbat, because of the "Shabbat גesecration" involved.

According to the statement, the Israeli Police"Mabat 2000" security camera CCTV and recording program is not "sufficiently supervised" and therefore, the newspaper ad advises followers of R' Elyashiv to avoid visiting the Kotel on Shabbat and Jewish holidays. I assume his ruling would apply to walking anywhere in Jerusalem's Old City, since the entire Old City is secured via this security camera system. 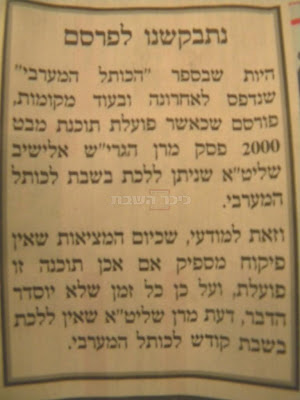 Previously, R' Elyashiv ruled there was no problem with the Mabat 2000 system.

I have a feeling this is going to quickly go the way of the "Shabbat Elevator" ruling.

These are the issues that really separate the men from the boys when it comes to daas torah. As was recently written on another blog, daas torah is only daas torah as long as it is suitable for the said rabbi's followers. However, most likely R. Elyashiv never said what has attributed to him.

There are multiple high-resolution telescopic cameras mounted on satellites constantly photographing every single square inch of all land surface on Earth, every single minute of every single day.

Based on the psak described in this post, it should therefore be forbidden to ever walk outside anywhere at all on Shabbat.

This has been a known issue for many years when visiting hospitals, and many Rabbonim have paskened that there's no problem because (a) eino psik reisha, it's not clear what cameras are being viewed, and a camera not being viewed on a screen doesn't have a substantial effect, (b) eino nicha lei, (c) eino miskaven, (d) LCD screens nowadays are miderabanan unlike CRTs years ago, .....

In case you would have taken them seriously, this quote from the Kikar Shabbat article should set you straight:

First of all, until anyone can present an actual written or printed teshuva where the ruling and its explanation is provided, in the traditional manner of halachic shailot and teshuvot of poskim, reports like this are worth the same as used toilet paper. Most likely they are not even quoting the rabbi in question.

Consider: with each Jewish holiday and each passing year, more and more religious Jews are swarming our "holy site" in unprecedented numbers. Consider the 3 festivals - the numbers are incredible! Unthinkable swarms of people no one could have envisioned a few decades ago, right? The state is very worried. They know the basic formula and can do the math.

It's a chain - More connection to Kotel means, at least eventually, more connection to Temple Mount. Because the 'ghetto wall routine' can only last so long. Eventually the drug wears off and with enough people going to Kotel, soon a sizable group of them will start to say, why not the real thing and why do we pretend this is a holy site when our real site stands just feet away from here?

The state is scared to death of massive numbers of Jews establishing a national connection to Temple Mount and the logical conclusion of that, Jews reclaiming Temple Mount. The state understands it can attack this "problem" at the root by undermining the connection of the masses to the "stepstool" known as kotel hamaaravi.

I would not be surprised if the "askan" involved in this phony nonsense is actually a state employee, or he understands where his bread is buttered and will receive a handsome reward to his struggling-to-get-by kollel family for a ruling like this (as will his community/yeshiva in the next round of govt handouts).

I wish to go to Israel so much

It's disgusting people like Eliyashev and his followers that keep me from wanting to go to Israel.

You don't. I'm not a follower of the Taliban

I doubt he said this considering that he mattired the same system repeatedly. Most likely it was an "askan." For those who don't know, askan is yiddish for a man who wages war against God for control of the Jewish people.